"Superman Returns" to His Bodhisattva Career

Singapore -- As Superman levitates in meditative solitude in the silence of space above the Earth, he listens intently to the world with his super "omni-hearing". The narration goes, "You (Lois Lane) wrote that the world doesn't need a saviour, but every day, I hear people crying for one." He then "awakens" from his stillness and zips off faster than a speeding bullet towards wherever help is needed. 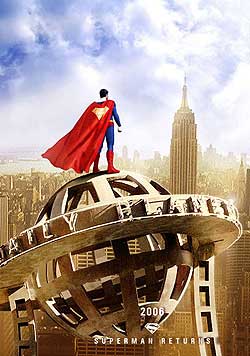 The first impression fellow Buddhists might get from the above "Superman Returns" trailer, is how the scene is reminiscent of Guanyin (Avalokiteshvara) Bodhisattva. For the uninitiated, Bodhisattvas are great beings who aspire to unconditionally help all beings be free from any suffering.

Guanyin Bodhisattva is known for literally "regarding the cries of the world", ever ready to lend a "thousand" compassionate helping hands, even as she retains her wise and equanimous calm. Fast as Superman might be, he can only help on a case-by-case basis, while the enlightened Bodhisattvas can manifest myriad forms to help the multitude within the same instant! Though he uttered "I'm always around" repeatedly in the film, well, the truth is he can't be everywhere all the time!

Yes, Superman (played by Brandon Routh) is not enlightened after all. He can only save physical lives, and not save individuals' spiritual lives - though he might inspire many with his compassion in action. Superman was featured almost in a god-like way with a host of archetypal comic book super powers, while Lex Luthor (played by Kevin Spacey) comments that "gods are selfish beings who fly around in little red capes and don't share their power with mankind." Well, it's not so much that he doesn't want to share, but that he can't share his power, it being his self-earned karmic birthright! Similarly, the enlightened cannot literally make us wise, but can only share with us their wisdom on how to become as wise as them.

It would be terrible if a "super" villain like Luthor has Superman's abilities. Unwilling to lose out, he steals Superman's alien crystal technology instead. Knowledge might be power, but when unguided by wisdom as to how to utilise it for compassionate ends, even a little knowledge can prove dangerous, as he uses his wicked mind as a deadly leverage against Superman's muscles. With Luthor's plans, a fragment of crystal grows monstrously and threatens to swallow up an entire continent. The crystallisation of evil from a single seed of ill intent!

Like they say, technology might be the "new god". But obviously, it becomes an evil god when used for wrong ends. And Superman, is no god after all. He is mortal, albeit a very super one. He is no creator of the universe; but a universal protector, even as others create, re-create and destroy their own worlds karmically.

The film begins with Superman having an existential crisis of his true identity and place in the universe, having left Earth to investigate the remnants of his destroyed home planet in deep outer space. He had gone on an external "soul-search"... (Someone even thought he "met lamas"), only to realise he has no fixed identity within, only to discover that home is where his heart is now, not where he was from in the past. The alien has come home after a trip around the universe! The alienation has ended.

Though cosmically "displaced", he finds his place in the great scheme of things. He turns his tragedy of being orphaned to a celebration of altruistic heroism, standing once again for truth and justice. It is interesting to note that Superman would not be super on his planet of origin. He has super powers on Earth exactly because he was displaced "appropriately". However displaced we ourselves might feel, we too can surely discover our relatively unique but appropriate strengths to better the world.

In the face of present massive human caused troubles, one man alone, even if he is Superman, surely cannot save the whole wide world. Superman cannot force peace upon the hearts of those who cry for war. He can only urge them to have temporal ceasefires. Even in the comics in the era of World War II, Superman could not stop the war. Neither can he save the world from problems like global warming, since many of this world still do not heed the warnings of the environment gone wild. Ultimately, as long as he cannot inspire humankind sufficiently to practise compassion with wisdom to each other, he can never save humankind from destroying themselves. A sobering thought.

Jor-El (played by Marlon Brando), father of Superman (Kal-El) tells his son through a recording, "Even though you've been raised as a human being, you're not one of them. They can be a great people, Kal-El. They wish to be. They only lack the light to show the way. For this reason above all - their capacity for good - I have sent them you, my only son." This reminds me of the Buddha being born among humans, who became more than human, a fully enlightened being, a torch of wisdom which guides humankind in perfect confidence that all beings have Buddha-nature, the ability to become pure.

Jor-El's aspirations for Kal-El can be loosely likened to Buddhas' wishes for those they perceive to be their Dharma "sons and daughters" (e.g. Bodhisattvas). In Mahayana Buddhism, Buddhas are described as Dharma Kings, while Bodhisattvas are often known as Dharma Princes - they who would become kings in time. Just as a prince would inherit the king's throne, the son becomes a father eventually. Interestingly, the metaphorical fatherly Buddhas can also manifest as "sons and daughters" out of compassion - reassuming the roles of Bodhisattvas. The unbroken spiritual lineages connected by Compassion ensures there are always Bodhisattvas around.

Not yet a perfect Bodhisattva, we see Superman occasionally distracted by his worldly love for Lois Lane (played by Kate Bosworth). Indeed are our attachments also our weaknesses. We see the struggles he has between juggling special attention for one versus taking care of the rest of the world. This is understandable favourtism. Alien as he might be, Superman is still "human", with unenlightened unequal love. Though Superman is almost physically invulnerable (since Kryptonite is his only nemesis), he is still emotionally vulnerable.

In a scene of recuperation, we see Superman flying up above the clouds to soak in the rays of the yellow sun, the energy source of his powers. It was almost as if he was bathing in the "light of wisdom", as he takes a moment to reflect, recharge and heal. Yes, light is symbolic of wisdom in Buddhism. Somewhat a social misfit in his alter-ego of mild-mannered reporter Clark Kent, we see him bumbling along, as if struggling to blend in with the mundane, like a Bodhisattva who is actually beyond the worldly, who decides nevertheless not to be reclusive, striving to "be" one of the crowd, for the crowd's sake. Bodhicitta indeed! Surely, there are countless Bodhisattvas walking among us, skilfully disguised like Clark!

Lois Lane had penned the bitter article "Why the World Doesn't Need Superman", as an attempt to get over his disappearance years ago. At the end of the movie, she writes an article titled "Why the World Needs Superman" instead. But is it true? I don't think the world needs Superman. The world's problems, as created by the world, are, as mentioned, way too colossal for any one person to handle. This is "Why the World Needs Many Supermen and Superwomen" instead. It needs us to fulfill the roles best we can to reverse the pain and suffering in our world. When the world is filled with Super Bodhisattvas, what need would there be for a mythological Superman?