Enormous ambition paid off for filmmaker Christian Frei when he showed 2,000 Afghanis their first movie - his documentary about their giant Buddhas, destroyed by the Taliban

Bamiyan, Afghanistan -- They hadn't seen anything like it — a film about their own town projected onto a big screen. In the background yawned the infamous 52-metre-high empty niche where once the larger of two standing Buddhas in Bamiyan looked upon the valley. The Taliban destroyed the pair of statues five years ago. 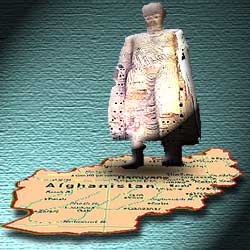 For centuries this valley has been the crossing path of monks, travellers, tourists, invading armies and wanderers — the once-famous Silk Road, connecting China to the Mediterranean Sea, passed through here.

But never before had a film — a documentary film about the Buddha statues, declared a UNESCO heritage site after they'd been turned to rubble — been shown here.

In fact, the city of Bamiyan, itself a provincial capital of 100,000 people, has never had a cinema.

Christian Frei's 2005 film The Giant Buddhas has been shown on screens all over Europe and North America but not in the place of its inspiration, in Afghanistan. Frei traced the concept of Buddha statues back to China and shot his film in Afghanistan itself, as well as in China, France, Canada and Qatar.

In the small Gulf emirate, he obtained exclusive film from Arab television channel Al-Jazeera of the Taliban's destruction of the Buddha statues that stood for 15 centuries 2,500 metres above sea level. The reels show Taliban fighters placing explosives around the world-famous icons, lowering themselves on ropes onto the figures' heads to destroy the priceless artifacts. The scene is as heartbreaking as it is incredible.

Yet, in his film, Frei recreated the statues through the 3-D photographic expertise of French imaging specialists, and the film ends with the Buddhas' visual — though not corporeal — reappearance on the mountainside in Bamiyan.

Recently, the Swiss producer and director of the documentary turned his talents to creating another sort of spectacle with his desire to show The Giant Buddhas in their former home, the Bamiyan valley. It was not an easy task.

Months before his documentary's July 27 screening, Frei made arrangements for the film to be dubbed into Dari and contacted government authorities for permission and assistance. He arrived in Kabul a week before the scheduled screening and flew to Bamiyan on a UN-chartered flight, carrying the film's master tapes with him. But the projector needed for the screening — uninsured and worth more than $40,000 (U.S.) — got "lost" while being sent via DHL global couriers from Zurich. By the Thursday morning of the screening, an exhausted Frei believed the event he had dreamed about would not happen.

Still, he decided to forge ahead — he had little choice, since posters advertising the film in Dari and English had been on the walls for weeks. A local man with a loudspeaker, publicizing the documentary Afghan-style, had been spreading news of the upcoming event around town and in surrounding villages. Journalists had come from Europe to record the event. Both foreign and Afghan dignitaries had been invited.

I had made the non-stop, three-day journey from Toronto to be there. I had a part in the film and wanted to witness the historic moment of the documentary's images playing out where the Buddhas once stood.

As the screening hour approached, Frei's contact in Kabul finally located the projector. In a heavy black box, the projector was literally rushed through the gates of that city's airport and put aboard a plane preparing for takeoff, the only plane leaving for Bamiyan that day. Only in Afghanistan could the drama of showing a film match that of its story.

At the site, across from the cliff where the 1,500-year-old statues had once stood, Frei put up a 4-metre by 3-metre screen. The excitement of the crowd, mostly young boys, grew when the magic black box opened and the projector was fixed in place. Frei was hoping for an audience of 300 people. More than 2,000 people showed up, and waited nearly four hours, to watch the film.

A few spectators snapped up the handful of plastic chairs available, so hundreds of others sat in semi-circles on a bed of fine dust, climbed up ruined walls, or stood on the hilltop to watch. There were no expectations that any women would attend — in this part of world women sometimes go out to aid in farming, but never for entertainment. Yet at least 50 local women showed up, some from nearby villages.

"This is (my) first film and I wanted to see it because I didn't know what it was really going to be like," said a young woman named Sabra, who attended with her younger brother.

Amina, 17, had walked for an hour to make it to the screening, along with her neighbours. "I heard about the film. I wanted to see what it says about the Buddha statues. I wouldn't have missed the chance."

Amina's father was killed by the Taliban. She and her 12-year-old brother ran away to survive. "We came back after the Taliban were defeated because I wanted to go to school," she said. But because of her poverty, she works as a maid in a house where she receives food instead of an income. "I approached this woman myself, suggesting I could clean her home if she helped to feed me and my brother."

Zamir Moboraz, from a neighbouring village, said the film reminded him of the monstrous behaviour of the Taliban not only toward the statues, but towards Bamiyan's inhabitants. He went into hiding when the Taliban police began killing civilians. In fact, some families still live in the caves that pock the mountainside.

Bamiyan is home to the Hazaras, one of the minority ethnic communities in Afghanistan. They belong to the Shia sect of Islam and were considered infidels by the Taliban, who were Sunni. "They threw people into the wells and suffocated those who were hiding in the caves by burning hay in the caves' mouth and blowing the smoke inside," said Moboraz. "Their savagery, the degree of their cruelty, is hard to understand."

A few months after the fall of the Taliban government in November, 2001, UNESCO declared the area of the Bamiyan Buddhas a world heritage site.

Finally, after sundown at 7:45 p.m., the projector was working and the film began. Viewers sighed each time they saw the explosions that reduced the statues to rubble. Mirza Hussein, who appears in the film, was among the few who heard and saw the wreckage. He talks, on camera, about the stages of the destruction.

"First they hit the statue with tank shells and rockets," he said. "But they couldn't destroy the entire statue."

The Taliban then packed explosives at the base of the niche, bringing down the remaining pieces. "They were celebrating," said Hussein, who came to watch the film with his family.

When Hussein's 6-year-old daughter saw her father's film image, she asked why he looked larger than he did in real life. His wife, smiling with pride, said she thought her husband looked handsome on the big screen.

Frei started filming his documentary three years ago, before Hussein and his family moved back out of the caves near the Buddhas' site. Despite a government initiative, some families still live in the caves that dot the mountainside. Hussein said he likes his new home, but is unhappy about the lack of electricity and the hour-long walk to fetch water.

Bamiyan does not have a system of transportation. Most people walk, sometimes for hours, to the city's only hospital or to shop in the market. Most houses are built of handmade mud bricks.

Electricity and telephone landlines are non-existent. New generators provide limited power supplies and mobile phones are now common, even among farmers who carry them to work despite their lack of farm machinery.

Streams run down from the Bahbah mountains (a part of the famous Hindu Kush range), yet there is no proper water system. Women gather along the springs and brooks to wash clothes and dishes. The majority of the population carries water in plastic cans on their heads or tied to a donkey.

A flattened surface atop a mountaintop serves as an unpaved runway for diplomatic, military or humanitarian planes. A road journey to Bamiyan from the capital of Kabul takes more than nine hours, along a dirt road that is at times so narrow cars can pass only by inching to the edge of a cliff face.

Yet, Bamiyan is a place of spectacular beauty, with mountains, green fields and a sky so dark that the Milky Way is visible virtually every night.

In a country witnessing a resurgence of violence, Bamiyan is also safe. Foreigners are usually greeted with a smile and curiosity, rather than the hostility they may face in the country's south. This is the only province in Afghanistan that has a female governor — Habiba Sorabi, appointed in February, 2005, and the first in Afghan history.

It was there, two Thursdays ago under a blanket of stars, that Bamiyan residents — joined by Gov. Sorabi, the Swiss cultural attaché and the German ambassador (whose plane brought the film project) — sighed with grief as the scenes of the Buddhas' destruction played out in Frei's film. As it came to an end, audience members either walked away or surrounded the director and those who appeared in the film, shaking hands and thanking them for the production.

Frei told them he showed the film where the Buddhas once stood because he wanted to give something back to the valley. A group of students from the Bamiyan university established two years ago — another first for this province — told him of their interest in art and films.

"I want to be involved with movies," said Ahmed Farid, one of the students. "I'd like to become an actor." It was an encouraging sign that the people of Bamiyan, despite the crushing influence of the Taliban, had become tolerant toward images and pictures.

Yet no one seemed to remember the plans for the rebuilding of the Buddhas, a project that the film also talks about.

Edmund Melzl from the International Council on Monuments and Sites is interviewed in the film. Attending the screening, he commented that it is a daunting task to reconstruct the broken Buddhas because the cliff in which they were carved was mostly composed of sand.

"It's possible," he said, "but very difficult. We hope that if they rebuild anything, at least they should aim for something authentic and not some kitsch creation, turning this place into a sort of a Disneyland."

For now, there is no specific plan to rebuild the statues — only to preserve the site and the niches bearing the Buddhas' rubble after the explosions.

And to the people of Bamiyan, rebuilding the Buddha statues is not a priority.

"It is important for us now to preserve what's left of our rich heritage, but we first need to help the people."

The popularity of the Bamiyan Buddhas, combined with the nearby Band Amir mountain range, are held as potential resources to develop tourism that would, in turn, help the province strengthen its economy.

But, for now, the smashed Buddhas remain where they fell, regarded with both fear and hope. Ironic that it was Buddha who said, everything changes, nothing remains the same.