Boston, MA (USA) -- Back in the 1970s, John Bush, director of the new film "Vajra Sky Over Tibet," was living in Cambridge and deep into his embrace of Tibetan Buddhism. His India -based teacher and entourage had traveled to the United States and were staying at Bush's home, and Bush founded a Buddhist center in the city. 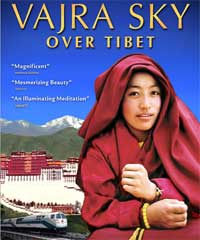 He went on to become a filmmaker and spent the past six years producing a trilogy of movies about what he calls "travels to places of spiritual wonder and empowerment." "Vajra Sky," which opened Friday at the Kendall Square Cinema in Cambridge, is the third and final installment.

The film is part meditation on and part travelogue to Tibet, documenting places where the Buddhist practice still exists despite the ban by the occupying Chinese government.

It visits, for instance, a nunnery where young women sit chanting while cutting strips of paper that contain written mantras, roll and seal the strips in cloth, and put them into spindles for prayer wheels.

Other sections of the film take viewers into temples and monasteries.

From his home in New York's East Village, where he moved in 2001 after 25 years in the Boston area, Bush says his biggest challenge was deciding how much to let the images speak for themselves.

"My original intent was to make completely non verbal films, allowing these sacred sites to reveal themselves," Bush says.

But when he test-screened the first film and found that people had questions, he added narration. (The DVDs, though, offer an option to watch with just ambient sounds and indigenous music.)

"The films loop," Bush says. "Someone told me that they leave one on all day to feel like they're in Tibet while they're doing their housework -- they've got this little window into this other world."

The film received the blessing of the Dalai Lama, the exiled leader of Tibetan Buddhism.

"Vajra Sky" plays the Kendall through Thursday and moves to other cities nationally next month. It's no coincidence that it opened here first. ``That's where I started the project," Bush says."`The film came out of my life in Boston."