Singapore -- As the tagline goes, "What if you had a universal remote... that controlled your universe?" Such is the premise of this comedy, which delivers surprisingly solemn lessons of life in its later half, beyond its familiar but innovative doses of American humour. 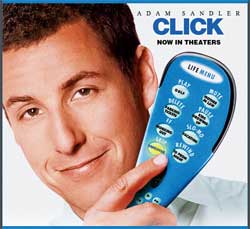 Adam Sandler plays Michael Newman, a workaholic architect, who deludedly believes that the quality of family life in the moment is worth missing, as long as he is working for a better future.

He chances upon a "universal remote controller", given by the mysterious Morty (played by Christopher Walken). Angel-like at first, Michael later realises the boon to be a trap. Morty was the "Angel of Death" in disguise. The Buddhist "equivalent" is "Mara" - the personification of evil, temptation and death - as a "heavenly demon"! But as always, to those wise enough, Mara unwittingly becomes the teacher of important lessons, which make them wiser!

Like a modern magic wand, the remote is able to fast forward away the unpleasant parts of his life, rewind to good old times, pause for setting up mischievous tricks, mute undesired barking and nagging... you get the idea. The creative usage of the remote is where the load of the gags comes in. Michael's whole life becomes accessible like a DVD film menu, with chapters and all. It even has a conscience-like voice offering movie commentary! A metaphor perhaps, for the "movie" of life, as produced, directed and written by ourselves.

Probably a typical victim of the impatient fast food generation, Michael fast forwards his life to get ahead to his triumphant moments, assuming he knows where its good chapters are, thinking that all that he had skipped must be the tiresome bits. Failing to live in the present, he misses the bulk of his life, unaware of the importance of chapters unexperienced. He becomes absent to his family - an absent husband, father and son. Losing mindfulness of the preciousness of the moment and lost in the future, he becomes absent even to himself.

Pressing the fast forward button becomes an autopilot mode of living. Not living life in a manual deliberate mode, he misses the lessons crucial for growing spiritually. Living for only the highs while fretful of the lows, he becomes a "hungry ghost", constantly craving for the next high. Every time Michael rewound his life, it was symbolic of his attachment to the past. Every time he fast forwarded it, it was symbolic of his aversion for the present, and attachment to the future too.

Bypassing the efforts and pains of the process towards success, he could neither truly taste nor treasure his achievements. The pot of gold at the end of the rainbow chased after was just an illusion - an empty promise. Joy is to be found by living in this moment in the present, not for that bygone moment in past or for that unreal moment in the future. He was simply "not there" when the important minor and major details in his life happened, be they happy or tragic. Ironically, living too much in the "fast lane", he had to "catch up" for lost time, so as to understand the nature and value of that missed.

Almost too late, Michael realises his son to be following in his footsteps, missing the priority of family over work. In a touching scene, to ensure history does not repeat, he passes on what he had learned to his son, uttering his "last" words, "Family... always comes first." For altruistic monastics on the Bodhisattva path, their "family" is not only non-existent, it is immeasurably big - it includes all beings! Love is to put others before ourselves, just as a loving family man or woman places family before self.

Well, this is a comedy after all. You can trust its ending to be cheery... Michael wakes up, both figuratively and literally - to his grave mistakes, and from his bittersweet nightmare. It was just a dream, albeit a very enlightening one. Michael Newman is now spiritually reborn - he is truly a "new man"! As in the reality of the rounds of rebirth, there will be infinite second chances, if we want to take that many! There is always hope for liberation, as long as one strives to awaken to one's delusional misgivings.

Remember, this passing moment is all we have. Why waste this moment by dreading or neglecting it? The greatest lesson from "Click" perhaps, is that there is not a moment to lose, be it bitter or sweet, because once lost, it can never really be reclaimed. We need to make the best of the moment. There is no rewind button in real life! To conclude, is an intricately balanced quote from Stonepeace,