Singapore -- The film "300" features a powerful adrenaline-charged but semi-historical dramatisation of the Battle of Thermopylae in 480 BC - where some 300 Spartan soldiers attempted to fight against a million Persians to defend their land and freedom. A major clash of civilisations and ideology it was, though the numbers are still subject to debate. 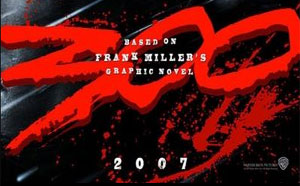 Then again, the director Zack Snyder did say the film is "an opera, not a documentary". As Dilios (played by David Wenham), who narrates the film put it, a good storyteller knows how not to wreck a good story with truth. It is true that the moral of a story is more important than its factuality, but surely, it is politically touchy when history is "tampered" with excess creative interpretation?

While spectacular with graphic artistry and special effects, including on the gory, "300" seems to polarise the concept of friend versus foe too much, perhaps over-demonising the enemies while over-glorifying the heroes. The battle did help paved the way for the spread of the democratic cause throughout the world. However, according to a historian, the Persian Empire hired and paid people regardless of their gender and ethnicity, while less than 14% of Greece at that time participated in democratic governance, with some 37% of the population being slaves. Sparta was more a militant monarchy than a civilian democracy. So it seems, the Spartans were fighting for freedom, but not for everyone's?

Little known is that prior to the teeming rise of the democratic ideal in Greece, the Buddha already advocated it to some extent within his Indian monastic community, circa 563 BC. It could be argued that he was the founder of democracy, though not at a political level. The Buddha's ideology ensured harmonious and non-violent rule in the Sangha by adherence to the Dharma and Discipline (Vinaya). This is of paramount importance, without which Buddhism would not have been passed down to us over the generations. Over two and a half millenia, the Sangha is one of history's most tested and enduring community. The Discipline that the Buddha taught abides by the Middle Way of moderation beyond extremes. This contrasts sharply with the portrayal of the Spartans' harsh and almost unforgiving military training. Though highly disciplined in their code of conduct and refusal to surrender, they are also merciless to invaders.

There are two main ways to "fight" for freedom. The first is the Spartan way - to literally fight for it - physically. The second way is the non-violent approach - to engage in peaceful dialogue for the enemy to understand one's right for freedom. But what if the enemy refuses to listen? Should we be merciless to the merciless? As His Holiness the 14th Dalai Lama said, "Through violence, you may 'solve' one problem, but you sow the seeds for another." The Buddha reminded us this - "Your worst enemy cannot harm you as much as your own thoughts, unguarded." Also, "Hatred will not cease by hatred, but by love alone. This is the ancient law." One wonders what would had happened if the Spartans' enemies were also Spartan-like. Would more blood be shed, or would truce be called?

A Vietnam veteran once rebuked Thich Nhat Hanh, a Buddhist monk, on his dedication to non-violence, chiding him for being foolish if he does not kill someone who is about to kill him, which might thus "end" Buddhism. Thich Nhat Hanh patiently replied, "It would be better to let him kill me. If there is any truth to Buddhism and the Dharma, it will not disappear from the face of the Earth, but will 'reappear' when seekers of truth are ready to rediscover it. In killing, I would be betraying and abandoning the very teachings I would be seeking to preserve. So it would be better to let him kill me and remain true to the spirit of the Dharma." Which is more glorious in spirit? To conquer in a bloody or bloodless war? Sometimes, you do not need to "win" in order to truly win, as also demonstrated in the film.

Is the above second way of "fighting" for freedom too passive, or even useless? It is worth considering Tibet's largely non-violent response to being occupied. Though home was lost, refugees in exile helped share their peaceful ideology throughout the world. The Dalai Lama even won the Nobel Peace Prize for his efforts of spreading peace. Is not living one's ideology fully thus more powerful than killing or dying for it? Which is more important? Life or freedom? But is there real life without freedom? But there is no freedom in death either. We need to make the best of the situation. In the film, tyranny was disguised as democracy on both sides to some extent - for the Spartans only had partial democracy as they owned slaves, while the Persians "offered democracy" to urge the Spartans to surrender. Abiding somewhat by a rigid caste system of masters and servants, the Spartans seem to believe that humans are not born equal. Karmically true - though all should be vested equal human rights.

The Battle of Thermopylae was of much importance because the noble sacrifice of the 300 inspired the rest of the Greeks to unite against invasion, thus becoming a turning point in history. For the next 30 years, battles were led by Athens, which was the most democratic Greek government then, thereafter leading to the blossoming of philosophical thought that Greece is famous for. This was the "coming age of freedom", as cryptically "prophesised" by King Leonidas (played by Gerard Butler) in the film, having asked a puzzled messenger to relay home the message of victory, despite knowing he was facing his final battle. Perhaps, there will always be the question of whether the bloodshed on both sides was needed for the cause of freedom. Freedom does not always come free, but in the course of striving for it, war should always be the last straw, if chosen at all. Befitting the end of this review, are three quotes by the Buddha for reflection, for both defenders and offenders -

"The worse of the two is he who, when abused, retaliates.
One who does not retaliate wins a battle hard to win."

"Though thousand times a thousand in battle one may conquer,
yet should one conquer just oneself, one is the greatest conqueror."