10 Questions for the Dalai Lama 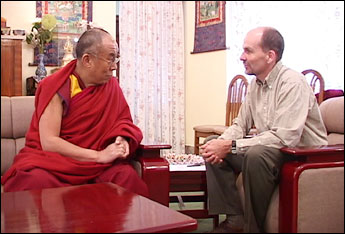 His overly reverent introduction to 10 Questions for the Dalai Lama is unnecessary for anyone with an elementary knowledge of Tibet, Buddhism, and Chinese aggression. But things pick up when the master actually begins to speak, his distinctive high-pitched voice regularly interrupted by his own laughter.

Treading carefully between traditional doctrine and common sense, the lama explains that desire creates suffering (although not how civilization would continue without desire) and rejects the caste system and the subjugation of widows.

The movie’s second half rises to the interview’s level, as Ray questions not only China’s treatment of Tibet (and Western acceptance of it) but also the great man himself. It turns out that the Dalai Lama’s easy laugh does not always lead to easy answers.