"The Invasion" of the Mind Snatchers

Singapore -- "The Invasion" of 2007 is our new generation's inspired "remake" of an old classic film - 1956's "Invasion of the Body Snatchers". Though also with a relatively simple science fiction premise, it is nevertheless, like all good stories are, credible as a possibility, and widespread in its implications if it ever becomes reality. This is the kind of movie which has the capacity to forewarn, even while it entertains. 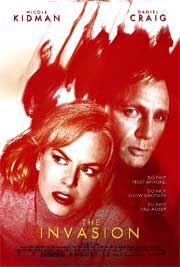 The crash of a spacecraft brings along strains of an extraterrestrial virus, which spreads a strange and devious disease. Infection is initially accidental, by contact with the virus, which kicks in only when one falls asleep. The result? One's form remains the same, but one's mind is lost. Fall asleep and you lose everything! From a Buddhist perspective, this sounds like an analogy for the loss of mindfulness - a common spiritual disease with terrestrial origins!

The plot is about the struggle to literally stay awake, to not give in to the plague of mindlessness that shrouds the masses. Buddhists might see it as the quest to awaken to reality. A single lapse of mindfulness is to fall "asleep" to reality. But as the film shows, some are immune to the virus, resuming their mindfulness after sleep. Thank goodness we are likewise - since we do need sleep!

We lose "life" when we lose mindfulness - we become "lifeless" mechanical beings - mere "body snatcher" shells. On a related note, the Buddha taught that "Heedfulness (mindfulness) is the path to the deathless (Nirvana). Heedlessness is the path to death (of awareness). The heedful die not. The heedless are as if dead already." To fully awaken, we need all the mindfulness we can garner. The Buddha also uttered this - "Mindfulness, I declare, is all-helpful. All things can be mastered with mindfulness."

In an invaded world where having awareness of reality becomes an anomaly, being normal becomes ostracised. Such is the Buddhist proverbial world of "upside-down beings". Your body might not be snatched by aliens, but your mind might already be "snatched" from mindfulness, by harmful "alien" distractions. A needle with a stimulant straight to the heart might jolt us awake, and pills might stimulate the disappearing of the blues, but ultimately, we also need the mind to cure the ills of the mind.

The underlying commentary on politics is not too subtle. Infected and thus deluded members of the government conspire to blackout the truth and to spread the atmosphere of fear, urging the masses to be inoculated against a new strain of flu which doesn't exists - when what they were doing was to systematically infect more with the alien virus. Alas, as in real life, with lack of mindfulness, the so-called "cure" is sometimes the poison.

The government-controlled media becomes an undetected Weapon of Mass "Disruption", spreading lies and contagion. The imagery of infected authorities vomiting a vile substance from their mouths to infect others reminds one of how easily "speech" made official can poison through propaganda. When the fourth precept of upholding the truth is lost at the top, deceit will spread to the masses.

"Invasion of the Body Snatchers" hinted of the loss of personal autonomy via the rule of a system of governance in its time, and the merciless "witch-hunting" of those who opposed it. Policed by the mindless in "The Invasion", all independent thought is subdued. There is no central intelligence, as the virus takes over the minds of the masses. There is no other one single "shepherd". The zombie-like "sheep" going through the motion of enlarging the "flock" is the very shepherd.

Though assumed to be of a higher intelligence, the animal-like herd mentality was obvious. With cold "soulless" efficiency and the conscience put to sleep, mindless violence for suppression of rebels takes over. There is no compassion and no wisdom involved - it's the way viruses work. A single deluded thought is likewise a potential virus to be eradicated - lest it manifests into word and deed, multiplying its destructive reach.

The film reflects the bystander effect during scenes of the unassimilated's cries for help going unheard, of how the dazed masses tend to be more easily numb or apathetic to the plight of the relatively few in suffering. As Edmund Burke once mentioned, "All that is necessary for the triumph of evil is that good men do nothing." An infected man urges another to surrender - "All you have to do is nothing." Yes, do nothing when you should and you will lose your humanity. Be absently indifferent to fellow humans and you lose your human-nature.

Inversely, the bystander effect also implies that we are more likely to be actively compassionate when we there is less of a crowd watching. Does this not mean our true nature is of unconditional compassion? Yes, we all have perfect Buddha-nature - the propensity to be as perfectly kind and wise as all Buddhas are. When we awaken to our Buddha-nature, we become true to ourselves and the world. Not awakened to it, we are but "worldlings", so to speak, "worldly ones" with no higher ideals. The Buddha was not one of the crowd - he rose above the crowd, so as to help the crowd.

World peace is simulated when the "single-minded" virus takes over the world through its citizens. This peace is virtual because it was forced upon the masses by brainwashing. Ironically, while the viral ideal to artificially render all as equals seemed noble, it is equally cruel as it heavily punishes those who refuse to conform, to give up their individuality. The truth of interdependence and thus "non-self" should only be shared, but personally realised, simply because enforcing it eventually backfires. True harmony is the ability to co-exist amiably despite differences. To coerce differences into non-existence is already disharmonious.

While the attempt to rule all as absolute equals might seem to be an ideal political system, it can never, as history attests, work truly successfully - not as long as the rulers and citizens have unequal wisdom and delusions. Also, individuals have different free wills to exert and personal karma to experience. To permanently force the maintenance of similar thinking and behaviour among the masses without any genuine change of mind is impossible. Instead of a political revolution, Buddhism proposes a spiritual one. The path towards mental equanimity and physical equality is to all evolve spiritually - to become equally perfect in compassion and wisdom, equally free of defilments - to become Buddhas. Actualising this makes our world a humanistic "Pure Land".

Being tricky to discern who has been infected, "The Invasion" teaches a hard lesson on life - that ultimately, the only person you can really trust is yourself - with the best of your mindfulness and wisdom. Even placing trust upon others is something you do out of trust of your own judgement. We are all personally responsible for our states of mind and decisions. This existential burden is also our basic freedom. It is thus of paramount importance to train our minds to be as calm and clear, and as wise and kind as possible. In the mean time, let us remember that we are already invaded - each to different extents - by the three poisons of greed, hatred and delusion. When severely poisoned, we lose our humanity. It can be reclaimed though.

The story ends with a cure found to curb the pandemic. Unless the unmindful themselves wake up, the mindful and compassionate will always do the best they can to awaken the unmindful, and to urge them to stay wakeful. At tension was spread of the pandemic versus the spread of the cure. A similar tension exists within us now - the moment the three poisons predominate our minds, the antidotes of the Dharma need greater domination. No physical medicine can cure our spiritual ills. Problems of the mind will always require solutions from the mind.

The cured forgot how they came to be infected in the first place, and how they recovered - memories are lost. The same unenlightened wars around the world resume. How many times do we have to forget our "past lives"? How often must we repeat history before learning from it? As the Buddha taught, "Hatred can never be ceased by hatred. Hatred can only be ceased by love. This is an eternal law." Indeed. Let's not take eternity to realise this.

Related Movie Review: Are You Alive in the "Land of the Dead"?