The "Rendition" of Truth or Lies?

Singapore -- "Rendition" is "the act or result of rendering". It also means "surrender", "performance" and "interpretation". Many interwined meanings indeed, all of which apply in one way or another to the film that is "Rendition" - a story about the controversial policy called "extraordinary rendition". 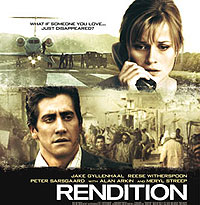 Rendition permits those suspected to be terrorists to be legally shipped out of the country for secret interrogation, with neither charges nor benefits of having a lawyer. "Rendition" is about one possible case gone horribly wrong. Of course, the audience hopes that nothing similar ever happened, and that it never would.

In the belief that extreme times with extremists require extreme measures, a man (played by Omar Metwally) was harshly questioned for his possible connections with terrorist activities. For a long time, he does not give any expected answers. He even pleads in exasperation - "Tell me what to say and I'll say it." Deemed to be stubborn and withholding the truth, he is severely tortured. Near his final breaking point, he finally confesses what seems to be the truth. Or is it? Are forced confessions always true, or simply forced to appear to be true? Is it not possible to force someone to cough up a lie as a truth, to make a confession not out of guilt, but fear?

The "politically correct" might not be morally correct - which is why the word "politically" precedes "correct". And this is not just about any state's politics; it also applies to the interpersonal and inter-organisational "politics". Just as there are prisoners imprisoned correctly, there are political prisoners imprisoned incorrectly. The movie doesn't clearly judge rendition to be plain evil or a necessary evil for the greater good. It illustrates however, of the possible extraordinary costs of extraordinary rendition. A hardcore interrogator (played by David Fabrizo) summed up his faith in the "merits" of what he does with a crass "saying" - "Beat your woman every morning. If you don't know why, she does." But isn't this believing a self-fulfiling prophecy and to forcefully fulfil it? Ironically, his daughter became the indirect victim when a real terrorist is put through rendition.

Of course, it is not justifiable to torture the innocent for truths they do not know. But does this make it alright to torture the guilty for the truth? And what if you are unsure whether someone is guilty or innocent, who might or might not hold information crucial for saving the masses? Should we assume innocence till proven guilty, or guilt till proven innocent? In the race against time, is torture an effective way, as a final desperate measure to prove what is important? Difficult questions indeed - much like moral "koans" (confounding Zen "riddles"). These matters might seem distant to us, only the debate of a few versus a policy for the good of the masses, but what if a family member is subjected to rendition? What if it was you?

"Rendition" reminds us of how easy it is for fighters against terrorism to become terrorists in the process, As Nietzsche warned, "Be careful when you fight the monsters, lest you become one." Perhaps we need to communicate with the "monsters" in question, to seek to understand more, instead of further antagonising them. If there is sincere and deep dialogue in the first place, perhaps there would not be any monsters in the first place to fight. Beware! As Stonepeace warned - "One who demonises others demonises oneself." Even "actual" outer "demons" are but manifestations of their inner demon of delusion within. If there is anything to demonise, it is delusion; not anyone.

On fighting monsters, there is a mythological serpent called Hydra - a monster tough to restrain - because whenever one of its many heads is cut off, two heads grow in place. In this line of thought, the righteous (but not self-righteous) whistle-blowing Douglas Freeman (played by Jake Gyllenhaal) remarks that "if you torture one person, you create ten, a hundred, a thousand new enemies." True indeed - if the tortured was innocent, with family and friends anguished over their safety. This is even more true, if the tortured was guilty, thus spurring the hateful vengeance of others with the same cause. Let us remember that even the guilty have innocent family members. Guilty or innocent, we are all interconnected by the cause and effect of what we do (or not).

As the terrorists in the film considered themselves religious, the story reminds us of "religious rendition" by proselytisers, who pull extreme guilt trips - by extensively preaching that we are all guilty to the core, that the cost of disbelief is eternal punishment. (Buddhism teaches that our true nature to be discovered is perfect Buddha-nature - the potential for realising perfect compassion and wisdom.) In some ways, intimidating "spiritual rendition" can be more devastating than physical rendition. On forcing for the truth and force-feeding "truth", the Buddhist take is that though there is high regard for truth, there is high regard for compassion too. Truth loses its worth when compassion is lost in the quest for truth. In fact, the quest for truth (which is wisdom) begins with compassion, and ends with the perfection of it. Compassion and wisdom must go hand in hand.

"Rendition" demonstrates the great harm of attachment to views - especially extreme ones. The Buddha also warned against attachment to views which are (deemed) correct - even if they are religious ones. Largely due to attachment to views, many unholy wars have been fought in history, in the name of "sacred" causes, killing millions of the innocent. Surely, if the holy ones we have faith in (whether they exist or not) are totally agreeable with extreme views and actions, they too would have been extremists by example? Can we imagine a host of "holy ones" from various faiths being extreme to one another, while divisively inciting all their followers to fight among themselves?

If we do not appreciate extremism from others, why act extremely to anyone at all? What we all need is to cultivate compassion and wisdom that is universal to all - this is the only "rendition" of Samsara we need. As the words on the Congressional Gold Medal recently awarded to His Holiness the 14th Dalai Lama (who is also the 1989 Nobel Peace Prize laureate) say, "World peace must develop from inner peace. Peace is not the absence of violence. Peace is the manifestation of human compassion."