The Ever Mindful "Eye in the Sky"

Singapore -- In the well-scripted and very humane film “Eye in the Sky”, there is an unnerving yet amusing scene where the leader of a band of robbers threaten to skewer one of his rebellious men's throat, while the men fight among themselves. 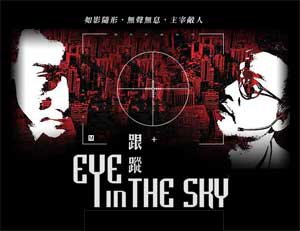 He yells at them to stop, and they freeze, becoming aware of what he could have done, and the madness of what they were doing. Suddenly, one of them catch sight of a woman undressing in a window across the street. Distracted, he watches.

The others become aware of that man's drifted attention and turn to look at what he's looking at. Together, they stop fighting and anticipate seeing her undress fully. Just when she is about to do so, she turns off the light. The men sigh at the missed finale, as they grin away the earlier tension. They then sit to discuss gentlemanly about their conflict and laugh it off with mutual-understanding. The audience might had expected “sex” or violence, yet both were relinquished.

That was one of the most nuanced tragicomedic scenes in cinema so far, which effectively marry the subtle balance of the elements of sex and violence. To me, it demonstrates how easy it can be for calmness and clarity of mind to be disrupted by sex and violence - the twins which have attachment and aversion as their basis respectively. If there is adequate mindfulness in the first place, one would not fall victim to either defilements.

Incidentally, many watch movies for “climatic” scenes of sex and/or violence to distract themselves from the humdrum of everyday life. Surely, many movie-goers heave sighs too, when they themselves miss the nude scene that the men missed! Those who prefer blood and gore would had wanted the violence to escalate. What did you sigh at, if at all? I didn't... instead, I “applauded” the ingenuity of the scene, and decided to write about it here. I laughed off the tension too!

Back to the subject of mindfulness... The detectives in the film, who specialise in the art and science of surveillance, are trained to be ever mindful of the people around them, any of whom could be a key suspect. Trained to have almost photographic memory, mindfulness is to become not just second nature, but the first nature. Each is to become an “eye in the sky” - an all-seeing intelligent living “camera”, that is mindful of the need to conceal and camouflage too. They pit their skills against criminals, who also need to be mindful to conceal and camouflage too, so as to evade the police.

The surveillance team members shadow suspects with dexterity as great as their anonymity, somewhat like ghostly Bodhisattvas. They keep tabs on “crime” scenes to tip off the more glamourous policemen - such as the Special Tactical Unit, to move in at the right time to arrest the criminals. At the risk of being discovered, the surveillance detectives suffer undercover blues too - such as not being supposed to become conspicuous by stopping criminals other than those they are watching. They get little public credit too, as their secret identities form the lifeblood of their vocation. This movie sings praises to these otherwise unsung and unseen heroes.