The (Anti-)Dogmatism of "National Treasure: Book of Secrets"

Singapore -- The adventure in the second instalment of "National Treasure" seems to be an exercise in proving the importance of anti-dogmatism, though it ironically supports some dogmatism too. 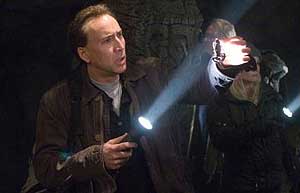 Ben Gates (played by Nicolas Cage) seeks to clear the name of his patriotic great great-grandfather, whom, upon the public presentation of a missing semi-burnt page from a historical notebook as "evidence", could had possibly betrayed the America of his time.

The story is dogmatic in a way as Ben strongly believes that the story about his great great-grandfather's heroism is beyond the shadow of any doubt. In the Kalama Sutta, the Buddha warned against simply taking hearsay handed down by for many generations as the indisputable truth. For instance, many once taught their children and their children's children that the Earth is the unmoving centre of the universe! To balance the picture, don't just believe - or disbelieve - anything. Instead, probe and enquire - till the truth is personally discovered.

Convinced that the half page presents an incomplete picture, Ben strives to show that the written isn't what it seems at all. It could be a lie, or it could have been misinterpreted. Well, it's not an unquestionable scripture after all. The Buddha urged the intelligent doubting of religious texts though - which would include those which record his words! A problem with words is that any one word calls to the minds of two people two different things - sometimes subtly different, sometimes grossly so. How reliable then, are words, in conveying truth completely? The Buddha was truly wise to emphasise experiential realisation of the truth.

The notebook was burnt to conceal the "key" to a city of gold, which was sought for ill political reasons. The brave attempt to destroy or distort this "worldly truth" cost the life of Ben's ancestor. This is reminiscent of the renunciation of the worldly as a spiritual sacrifice. Ben however, clings to clear the name of his family, to the extent of risking his life to prove his great great-grandfather's innocence. While there might be karmic similarities, the "sins" of forefathers cannot really be passed on though. A mercenary (played by Ed Harris) seeks the treasure in a desperate attempt to ensure his family's name goes down in history. Unfortunately, fleeting fame and fortune are but unsubstantial worldly pursuits.

In the chase for treasure and truth, one clue leads to another, leading to a major clue within "The Book of Secrets" - a legendary book handed down from one American President to another, which records the nation's top secrets. While Ben questioned the "truth" written on the half-burnt page, he most ironically never questions the integrity of the whole "Book of Secrets". Compiled by the unenlightened, how likely is it that all the important "truths" one would ever need are conveniently within a single book? Spiritually, truth must be so universal that it can be found in various places and times.

There is the seemingly natural tendency for many to take written or printed words to be the truth, the whole truth and nothing but the truth. These words themselves form no guaranteed truth! Historical texts and even scriptures, are usually recorded by the victors of wars, debates and suppressions, who pen and edit versions of preferred "truths" to their convenience, while destroying any other records in "conflict". Ironically, the written words which survive most openly might contain the most deeply conspired crystallisations of fallacies.

"Caveat emptor!" Thus did the Buddha advocated the vigorous testing for truth, as if one is testing for the genuineness of what is supposed to be real gold. This is reflected in Ben's relentless scrutiny for hidden clues and cipher keys. One has to be careful though, to not forcibly see only what one wishes to see, to discover "hidden" material that might not really be there. The controversy of "selective reading" is perhaps reflected in the case of the "Bible Code". (See http://en.wikipedia.org/wiki/Bible_code#Criticism for details.)

The ending of the story hints of an upcoming sequel. What treasure will Ben and company hunt for next? What is the ultimate treasure to behold? It has got to be the ultimate truth, that will set all spiritually free - a treasure worth more in its "weight" than all the gold in the world. For Buddhists, they would see this treasure as the Dharma - the central jewel of the Triple Gem (the Buddha, the Dharma and the Sangha). The Dharma is the collective name for the precious teachings of the Buddha, which guide us to the priceless treasure that is enlightenment. The Dharma is no "national treasure" though - it's an "international treasure" that is truly universal - that can be inherited by anyone anywhere!