Why "CJ7" Shouldn't Be Alien

Singapore -- "CJ7" (Chang Jiang 7 Hao) is a heart-warming comedy about how the unconditional love of a faithful alien "dog" parallels that of a human father, together transforming a parent-child relationship for the better. 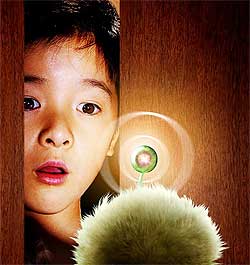 It isn't clear whether the arbitrarily named CJ7 is sentient or a sophisticated robot, but his lovable antics seemed all out to bring hope and joy into the life of the boy protagonist, despite being bullied at times - it's like patient Bodhisattva action!

The father admonishes his son repeatedly - not to fight, steal or lie, but to study diligently, so as to be useful to society in future. This seems to cover the second precept of non-theft and the fourth precept of non-lying in spirit.

There's a supposedly funny (yet tragic) scene though, of them swatting and stomping on (thankfully) CGI cockroaches for amusement. Looks like the first precept of non-killing was missed!

Those familiar with the director's (Stephen Chow) previous major hit movie "Kungfu Hustle" will spot him spoofing his own movie, where a giant Buddha shaped by clouds is replaced by a giant CJ7. No Buddha, but a Bodhisattva in disguise perhaps, who teaches lessons about love and life?

Incidentally, the boy was chanting "Amituofo" (the name of Amitabha Buddha) out of panic during his first strange encounter with CJ7. If we choose to read too much into this, he could have invoked a skilful manifestation of him in the form of CJ7!

While the accidental sacrifice of the father during hard work contrasts with CJ7's intentional sacrifice to save him, both were painstakingly doing their best to benefit the boy. This reminds us of a famous quote from the Metta Sutta (Discourse on Loving-Kindness) - "As a mother would risk her life to protect her child, her only child, even so should one cultivate a limitless heart with regard to all beings. With good will for the entire cosmos, cultivate a limitless heart: Above, below, and all around, unobstructed, without enmity or hate."

The quote above is indeed appropriate for the movie, since CJ7 is an alien with advanced technology, capable of travelling the cosmos to spread his good will! The happy end scene shows countless other "CJ7s" landing on Earth, running joyfully towards the boy. Will they bring much happiness to other children? Or rather, since they are fictitious, shouldn't we do that on their behalf? If unconditional compassion shouldn't be "alien" to humanity, may we multiply our compassion for all sentient beings, be they alien to us or not. Though the movie slogan says "It's out of this world", the spirit of CJ7 needs to remain in this world!