"Semi-Pro" Players in the Game of Life

Singapore -- Jackie Moon (played by the hilarious Will Ferrell) is the owner and head coach of a basketball team. At the same time, he is its promoter and "star-player", though he promotes himself more than anything else! Handling it like glitzy show business, he resorts to desperate promotional gimmicks, such as wrestling a bear, to gain popularity for his team! 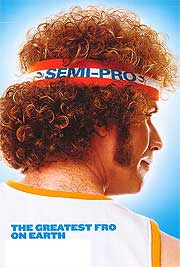 The main problem with Jackie is that he takes centrestage most of the time. While he might be skilled at showiness, his team is only "semi-pro, semi-talented and semi-spectacular" - in terms of the game!

Advocating the motto that "Everybody love everybody", Jackie ironically loved the limelight on him so much that he almost loses the team through lack of teamwork - as he insists to be the one shooting most hoops.

Facing the possible disbanding of the team due to dwindling popularity, he lets Ed Monix (played by Woody Harrelson) lead the coaching.

The negative results of Jackie's overwhelming selfishness "forced" him to be more and more selfless. Uncomfortable as it might be, puting his ego aside to let the "next better player" show the ropes of genuine basketballing was the right move.

Learning to let go of personal scoring, there is more synergistic scoring by the team on the whole instead. This is exemplified in a strategic tactic called the "alley oop", where there is letting go of one's fixation to score by oneself, by allowing a teammate to do it instead.

When one is fully mindful of the larger picture of the game, one dissolves the obstacle of self-centredness and becomes one with the game. Great victories always involve little emphasis on one's "greatness"! As the Buddha taught, greater than one who conquers others is one who wins one"self" - by realising non-self!

According to Wikipedia, "An alley oop in basketball is an offensive play in which one player throws the ball up near the basket to a teammate (or, much more rarely, to himself) who jumps, catches the ball in mid air and immediately scores a basket, usually with a slam dunk. It is an impressive way to score and often electrifies the spectators. The alley oop combines elements of teamwork, pinpoint passing, timing, and dunking." If we are not winning the game of life, maybe we ought to alley oop more with those around us!