Singapore -- "The Bucket List" refers to a list of desired "to do's" - before one kicks the bucket. Both having little time to live, Carter (played by Morgan Freeman) befriends Edward (played by Jack Nicholson). They draw up a list and resolve to fulfil it. 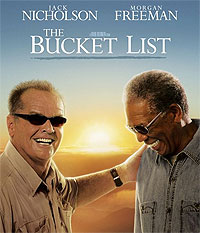 After a string of highs, the lows return. In fact, highs and lows already alternate in normal life, while Nirvana transcends the ultimately unsatisfying cycle of pain and pleasure in the pure everlasting bliss of liberation.

The film offers many reflections on life and death. Carter for instance, remarks that "You measure yourself by the people who measure themselves by you." In other words, one's worth is seen as how much one managed to inspire others by one's example. And which is preferred - to know when one will die, or to not know?

The first might be disturbing, while it allows better planning. The latter is the case for most now - not exactly comforting, since death is eventual, while we might die unprepared. That said, unless we are good spiritual practitioners, it is hard to tell the exact time of departure. Carter later passes away prematurely for example, while Edward recovers from his "fatal" illness. Death still comes though, as part of the First Noble Truth - lest one realises the deathless - Nirvana.

Seeing a stunning moonlit nightscape, Carter hints that he believes there is a creator who created it all, saying that about 95% of the world believes so. This "statistic" is of course extremely arguable. Edward rebutted that about 95% of the world is usually wrong, though he admires people who have faith, that he "just can't get my head around it". (Most God-believers did wrongly believe the Earth was the flat centre of the universe.) Carter replies that maybe his "head's in the way". If what Carter saw instead was prevalent human suffering by disease, war and hunger, would he believe there was a God who created or allowed it? Would his heart be in the way? Buddhism proposes the balance of heart and head by the twin cultivation of compassion and wisdom, among many other virtues.

At times, the film is almost preachy. While Carter believes in heaven after death, he did not speak of hell. He hinted of its "threat" though, by asking Edward - "What if you're wrong?" Good question though... What if? Would one be punished for not believing in a God, whom, if one believes in, also continually allows godless suffering to happen? Is such a God then perfect or just? Can such a God exist? The Buddha, also called a "teacher of humans and gods", realised that the existence of such a being in the universe is an illusion. Just as Edward spoke of faith in such a God being equivalent to believing in the reality of a "sugar plum fairy", Buddhists would respectfully consider the idea of God a "rabbit horn" - something imaginary; only in the mind - even if a comforting belief.

Contrary to popular belief, it is possible to live a moral and fulfilling life without faith in God, as Edward later did. Genuine morality and true meaning, after all, is that realised from within - our Buddha-nature - not from anyone without. Carter had the misconception that not subscribing to faith in God meant the belief in a random universe. Buddhists, for instance, see the universe run by various cosmic laws of cause and effect - some of which are naturally cyclic, but capable of interacting with the law of karma, which "governs" morality. In fact, the belief in the natural dynamics of karma offers a greater sense of impartial moral "justice". If it is natural that we offer second chances to others instead of eternal condemnation, nature too offers second chances via rebirths.

Carter tells Edward this - "My pastor always says our lives are streams flowing into the same river towards whatever heaven lies in the mist beyond the falls. Find the joy in your life, Edward. My dear friend, close your eyes and let the waters take you home [heaven?]." There is the danger of taking beautiful analogies as truth. If we live for different purposes, why should all be in the same afterlife? Edward quipped - "We live, we die, and the wheels on the bus go round and round." Sounds like the cycle of Samsara. He wondered though, about what a snail needs to do to "move up" to a better life. By little acts of kindness probably - very slowly - but being "slow and steady" gets you there! Streams evaporate to become rain too, before possibly becoming streams again. The mechanics of "rebirth" are already in nature, without anyone supernatural. If there must be a supernatural creator of nature, why isn't there a hyper-supernatural creator of this creator? Nature is already naturally self-contained.

The friendship of Carter and Edward brought much joy to each other. The tagline of the movie urges - "Find the joy." It relates to the river analogy above, and Carter's sharing of an ancient Egyptian belief - that before one enters the gates of heaven, two questions are asked - "Have you found joy in your life? Has your life brought joy to others?" Though Buddhism does not teach the idea of there being an eternal heaven for the limited goodness done in a single lifetime, these questions are nevertheless good gauges of the worthiness of one's life. The goal of Buddhists is to discover True Happiness, the truest being in Nirvana. Even so, the path to joy is one of increasing joy, as one shares the joy of learning, practising and realising the Buddha's teachings. As actualised by Bodhisattvas, joy is in sharing joy with others, in rejoicing in the joy of others, in resolving the non-joyful by repentance too. So, what's on the top of your bucket list? Nirvana I hope!