"Horton Hears a Who!" Whoever that is!

Singapore -- Probably because he has large ears and better mindfulness, Horton the elephant (voiced by Jim Carrey) hears a tiny voice in a speck of dust. This causes trouble though - because no one else could hear it. 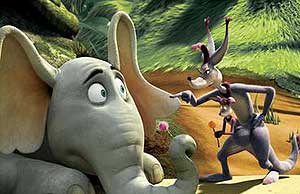 Meanwhile, there is Sour the kangaroo (voiced by Carol Burnett), who represents the skeptics, who proclaims that all should only believe in the existence of what could be heard or seen.

Not exactly a bad idea though. The Buddha too advised us "to know and to see" the truth - that is to say, to understand and experience reality as it is. That said, there is phenomena not readily discernible by the senses as yet - by the unenlightened. It is thus important to keep an open mind - till it becomes a fully enlightened one!

Realising that there is an entire town called Whoville filled with Whos living in the speck, Horton saw the urgency of finding a safe refuge for it - away from the literal jungle out there. Now, who are the Whos?

The author of the original story Dr. Seuss probably named them so because whoever they are isn't really important... while the Whos can be taken to represent whoever we wish? While anthropomorphed like all the animals in the film, it isn't clear whether the Whos are animals or not. As reiterated throughout the book and film, "A person is a person, no matter how small." This could be a subtle message for anti-speciesism!

From a review on another animated film, "Ratatouille" (http://buddhistchannel.tv/index.php?id=12,4770,0,0,1,0) - "For the uninitiated, anthropomorphism refers to the ascribing of human characteristics to the non-human. To some extent, the "humanisation" of animals helps to stir up compassion for the animals in real life. After all, all sentient beings wish to have happiness, to be free from suffering. The scurrying of rats in the film might be for humourous effects, but the fear of death that rats have is not very different from ours, if not more." From the anthropomorphism of small rats to big elephants, it is good news for animal lovers that the movie industry is lending more voice to voiceless animals!

On the "no matter how small" liner, some pro-life demonstrators saw it as affirmation of human rights beginning at conception. With his compassionate stance, the Buddha would agree. He once remarked that there are 84,000 (signifying a huge number) lifeforms in a cup of water. Arguably, some of these beings could be sentient (e.g. tiny worms), while some not (e.g. simple bacteria). However, sentient beings are sentient beings, no matter how small - be they the foetus of a human, animal or insect. To judge the value of life by size is indeed unfair - just imagine how you wouldn't want gigantic dinosaurs to consider you insignificant. Interestingly, in the sutras, there are descriptions of Buddhas taller than mountains in other world systems!

On the concept of a world within a speck, the Avatamsaka Sutra speaks of this - "Within every single mote of dust of all the dust motes in those lands as well as this land were Buddhalands many as the fine dust motes in a sea of worlds. In each of those lands there were Buddhas numerous as the fine dust motes in a sea of worlds." (http://www.cttbusa.org/avatamsaka/avatamsaka3.asp) Mind-blowing as this can be, how is it possible? The closing scene of the movie hints how when the camera's point of view zooms out into space, till the Earth is but a speck! It's amazing how the universe viewed at the microscopic level resembles itself in a telecopic way. In the Sutra of 42 Sections, the Buddha remarked thus - "I consider the positions of kings and rulers as that of dust motes in a sunbeam... I see the myriad worlds of the universe as small seeds and the great Indian ocean as drops of mud that soil one's feet." (http://groups.yahoo.com/group/zeph/message/688) That's the enlightened point of view!

The skepticism in the story was two-way. Just as Horton was the only who could hear Whoville, the mayor of  Whoville (voiced by Steve Carell) was the only one who could hear Horton. Well, open or close-mindedness is not always related to body size! Another instance of this would be the animal kids of the jungle, with whom Horton plays. While make-believing that they too held worlds in specks perched on their clovers, they were open to its possibility and questioned adult "authorities" on it.

Often, it is the underdog few who first stumble upon great truths, while battling against ignorance of the masses. Pronouncers of "new" truths tend to be branded crazy or heretic in the ancient days, while it is the dogmatic who really betray truth. There is a scene where Horton loses his clover in a field filled with clovers. His quest for the right one reminds us of the search for extra-terrestrial life in the outer reaches of space, where so many worlds exist that there might be some similar to ours. Buddhism is open to the existence of alien life!

Just as it is difficult for us to imagine Whoville existing in a speck, it was also difficult for the Whos to believe there was "a giant elephant in the sky" looking over them. This seems to allude to the idea of a powerful diety looking over us. But it could be a giant arbitrary "whoever" though, not whoever we imagine. In Buddhism, the belief in the improbable is considered the quest for a "rabbit horn" (http://rabbithorn.blogspot.com) - something unrealistic.

And why must there be only one "caretaker"? There might be many good and evil ones too. For example, humans who exploit animals are their malevolent "caretakers", while those who love them are benevolent. The Buddhist teachings state that there are countless Buddhas and Bodhisattvas constantly mindful of helping us, though there is the need to be mindful of them too, to fully receive their blessings. Think of it as establishing of a stable connection by tuning in well!

Though a funny story, the story hints of the grave danger of complacency to the truth. The entire world of Whoville was severely endangered, while few believed so. There's a scene where the inconvenient truth is highlighted to the Whos that the quirky disturbances they were experiencing was no passing bad weather, that it threatens their fragile world. Shocking as it might be, some today still disbelieve the reality and urgency of averting the climate crisis. If there was an infinitely kind and wise giant elephant in the sky taking adequate care of us all, the world would be safe. However, no one, not even the Buddhas can help us - if we do not realise the gravity of the climate crisis, while continually aggravating it.

If great responsibility should arise from having great power, as in Horton's case, then the infinite responsibilities of the universe rests upon the one with infinite power. But if is risky to believe there is such a power that will take care of it all, then it is wiser for all to take the personal and collective responsibility of taking care of the world. If everyone does their part, there is hope as yet.

After Horton heard a Who, he heard another voice - that of his conscience, of his Buddha-nature. This led him to muster his courageous compassion to do what needed to be done - to save an entire world. May those who have yet to heed the call of reversing the climate crisis do so. To save this entire world, we need the entire world to play its part. Just as the single voice of the Mayor's son (voiced by Josh Flitter) was the tipping point of the Whos' combined efforts to make themselves heard and saved, your effort helps to create this tipping point. A person's effort is a worthy effort, no matter how small!