The Irreverent Dharma of "Harold & Kumar"

Singapore -- Nope, Harold (played by John Cho) and Kumar (played by Kal Penn) are no heroes. Neither are they anti-heroes! They are just buddies bumming around for a good time (again!), and this inevitably gives the audience a good time too - with their hilarious antics and misadventures. The humour of "Escape from Guantanamo Bay" might be irreverently coarse at times though, but that's part of the fun! 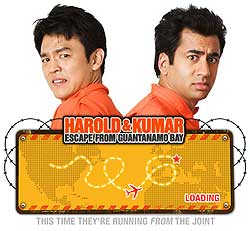 Put two non-white Americans together, of Korean and Indian descent, and be braced for an onslaught of racist jokes about themselves, which ironically becomes entertainment that subtly calls for non-racism. Perhaps the easiest way to ease racial tensions is to laugh them away with one another, by realising how ridiculous racial stereotyping is - by exaggerating this very stereotyping to the extreme!

When you discriminate those of other races, it might seem funny to you. But that's just all too easy, and hardly fair to anyone. What's truly "gracious" is to be able to poke fun at yourself, and to let others do the same! There is a funny scene where Kumar "over-sensitively" accuses a black man of being racist to him, as he was a minority. Kumar also accuses him of being "too fair" to be black! Okay now... name the truly racist one!

On a more serious note, during scenes of a crazed racist anti-terrorism police officer hurling accusations at the duo, it comes to mind that there is a "new" form of terrorism that is harder to detect or diminish - and that is racism itself. Racism dangerously breeds hate, fear and suspicion among the self-righteous. The truth is, one only needs to experience the goodness of a single friend of another race to realise how unfair generalisation by racism is.

Portrayed too, is the comical preposterity of the infamously racist KKK. This contrasts with a "gang" of black homeboys, who offer their hearts of gold to the desperate Harold and Kumar instead. Suddenly, the enlightened attitude of equanimity makes a lot of sense. Why nurse aversion for those of a race, or have attachment to one's race being supreme? Careful here - making a joke out of others might be making a joke out of yourself! As the Buddha taught -