Hurricane, Utah (USA) -- “Spring, Summer, Fall, Winter… and Spring” was shown, April 18, at the Canyon Community Center in Springdale as part of the Z-Arts! monthly film showcase. It is a Korean film that beautifully tells the story of an old Buddhist monk and his protégé at a secluded monastery. 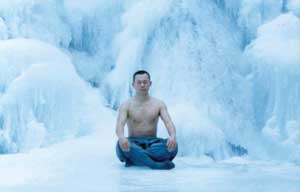 “This film is a visually elegant film and a very thought-provoking movie,” David Rutz, of Z-Arts!, said.

Rutz chose this film for the Z-Arts! monthly film showcase for these reasons.
“The idea is to have you interact not only with the characters but with the natural environment,” Rutz said.

As the film follows the young monk through his seasons of life, the viewer is treated to various scenes of the natural beauty that surround the monastery. The lush trees, the small lake, and the sentient animals are all characters in the film with whom the people interact. Nature’s presence in this film further develops the plot.

An old monk teaches a young boy at his tiny Buddhist monastery afloat a small secluded lake. The young, developing monk learns life lessons as he progresses from boyhood to adolescence to manhood.

Not only is the old monk his teacher, but the nature around him is as well. The viewer literally sees the seasons progress as the boy grows.

The young monk grows from boyhood in the spring of his life into the summer of adolescence. He leaves the monastery following love and returns in the fall of his life a changed, not necessarily for the better, man.

He returns to the monastery to find the old monk still there. The old monk welcomes the now changed man despite his past and takes the role as teacher once again.

His protégé again leaves the monastery and does not return until the winter of his life. This time he returns to an empty monastery, alone on the frozen lake. Although a mature man, he still has many lessons to learn as a person and as a monk.

He continues to learn life’s lessons and takes the role on the role as teacher as spring comes again and brings a small boy who becomes the new monk’s protégé.

The film is rich in symbolism and gives the viewer opportunity to think. There is very little dialogue in the film, allowing the surroundings to take a more active role as characters in the film.

"I intended to portray the joy, anger, sorrow and pleasure of our lives through four seasons and through the life of a monk who lives in a temple on Jusan Pond surrounded only by nature," Kim Ki-duk, the film's director, said on the film’s Web page, www.sonyclassics.com/spring.

Following the viewing of “Spring, Summer, Fall, Winter…and Spring,” movie-goers discussed the plot and symbolism and other attributes of the film.
The next Z-Arts! film will be “Burying the Past: Legacy of the Mountain Meadows Massacre.”

This film was the winner of many film awards at various film festivals. It portrays the tragic event that occurred in Southern Utah in 1857. This film was supposed to be shown in March, but due to unforeseen circumstances was unable to be shown.

It will be screened at the Canyon Community Center in Springdale Wednesday, May 7 at 7 p.m. The public is welcome and encouraged to attend and the screening is free. For more information on this film or any of the Z-Arts! films, contact Donnette Atiyah at 635-5692 or April Gates at 632-8669.