"The Dhamma Brothers": The transformative power of Buddhist meditation in a U.S. prison

Seattle, WA (USA) -- "The Dhamma Brothers," a documentary written and directed by Jenny Phillips, Andrew Kukura and Anne Marie Stein. 76 minutes. Not rated, suitable for teens and up. Grand Illusion. 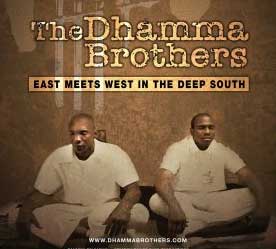 The question of how convicted criminals should spend their time while incarcerated is one of those evergreen issues on talk radio or in the stump speeches of get-tough politicians. Prison is punishment, some people argue, and therefore prisoners shouldn't expect to feel hopeful about their situation.

But at the exceptionally dangerous Donaldson Correctional Facility in Bessemer, Ala., where assaults are described in the documentary "The Dhamma Brothers" as a near-daily occurrence, hope appears to be a viable remedy for ceaseless violence. At least, that is, for a small group of inmates who participated in an unlikely 2002 experiment with Vipassana meditation.

Vipassana is an ancient discipline from India rediscovered by Gautama Buddha and taught by him as a form of rigorous self-observation, leading to mental and emotional freedom. How it ends up at Donaldson proves a fascinating story in itself.

Hearing that Vipassana had worked in Indian prisons, Donaldson's officials take a shot at progressiveness despite staff skepticism and wariness about Buddhism in Alabama's correctional system.

Taught by a pair of optimistic but demanding Vipassana guides, the round-the-clock meditation regimen is no picnic. For nine days, the inmates — men who have done pretty terrible things, some facing life without parole — are required to be silent. They abstain from intoxicants and violence and assume a meditation stance for hours at a time.

Other prisoners do a fine job of explaining, in a very personal way, how Vipassana (which one of the teachers says translates into "seeing things as they are") made them understand how impulses leading to crimes are reactions to illusions. Crucially, those impulses can be controlled.

The question deliberately hanging over "The Dhamma Brothers" — made by filmmakers Jenny Phillips (a psychotherapist involved with the program), Andrew Kukura and Anne Marie Stein — is how long that control can be sustained. Can killers spending every waking moment in a pool of other killers be transformed forever?

Considering the film took several years to make and that participating inmates kept up group meditations on their own despite a four-year ban (Donaldson was ordered not to promote non-Christian practices), the outlook for long-term benefits appears pretty good. Most of these men will never know freedom beyond prison walls, but they have learned liberation from within.