Singapore -- Near the opening of the film, weapons inventor Tony Stark (played by Robert Downey Jr.) comments that "Peace means having a bigger stick than the other guy." Nope - he is not anti-peace; though that train of thought wasn't very pro-peace either! This is obvious as he made big bucks from selling some of these "big sticks" - of missiles and such - innovative but lethal "peace-keeping" weapons... of mass destruction! 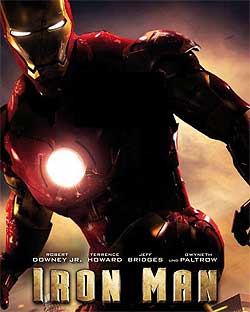 However, as the story advances, his arrogance fades away - when he is attacked and kidnapped by terrorists, who use the very same but black-marketed weapons he made. A karmic case in point - of reaping results of carelessly sown seeds of violence. Weapons, like knives, cut both ways - depending on whose hands they fall upon. But the hateful would always seek underhand means to procure weapons for furthering their ill intentions.

Probably as such, the Buddha considered trade in weaponry as an unskilful livelihood. What about for defense instead of offense? Well, it gets vague when a "good" offense is argued to be the "best" defense. It is thus kinder and wiser for the world to persuade nations to disarm themselves, than to create needless tension by making increasingly powerful weapons that point at one another. Are the best weapons those never fired? I prefer no weapons at all.

Stark was saved by a man who asked him not to waste his life. He extends this wish by saving others' lives. From his nationalistic and capitalistic ideal of "ensuring freedom and protecting American interests" in the movie, Stark's conscience in the comics awakened to the greater need of protecting the entire planet's common interests when he takes on the persona of Iron Man. This was inevitable, perhaps due to the interconnected international chaos that arose from weapon trade - be it his or others'!

Stark's creation of Iron Man, which is essentially a super-mobile armour armed to the teeth with cutting age technology, was made for inspiring both fear and respect. As he earlier quipped, "Is it better to be feared or respected? And I'd say, 'Is it too much to ask for both?'" Even fear is useful at times, as a skilful means to deter the intensely evil from doing more evil. Think the wrathful manifestation of Bodhisattvas!

Perhaps the most disturbing aspect of Iron Man is how he is portrayed to use swift violence - to fight fire with fire, which "terrorises" terrorists in return. Can they learn or repent by being killed? Unlikely. Another problem with weapon technology is not just the race to advance it, but that it can be replicated - by enemies - as in the case of the Iron Monger, who became his prime enemy. Reason again - for the world to renounce weaponry, difficult as it might be!

Badly injured, Stark became physically weak without his original armour - which helped to sustain his life. It was his personal protection, his shield from external and internal harm. But this protection was so strong, so powerful, that he further developed it to protect others from harm too. Without his altruism, his armour would merely be something that kept others out, instead of being an instrument for connecting positively with them.

Iron Man's armour reminds us of this teaching by Shantideva - "One can never remove all thorns from the world, nor cover the entire world with leather to make it seem less thorny. However, by covering one's own foot with a leather sandal, it is as though all the world has been covered with soft leather, and all thorns removed." (That's just an analogy - it's kinder to use faux leather to reduce animal exploitation!) The ultimate protective "leather" or armour of the mind is of course compassion and wisdom - not just for oneself, but for all.

Sleek and shiny, menacing yet elegant, the solemn unchanging "expression" on the mask of Iron Man is surprisingly "versatile". With the appropriate bodily gestures, it can speak volumes - ranging from cool calmness to fiery rage. Just as it is the mind that operates the suit which determines what it truly expresses, the mind of the audience decides what it implies too. What do you see in Iron Man? Part of yourself perhaps?