A Study of Rage in "The Incredible Hulk"

Singapore -- The Hulk is a personification for raw rage in all its unbridled terror. Perhaps we are fascinated by him as many of us entertain secret fantasies of venting bottled frustrations with absolutely no holds barred. But alas! 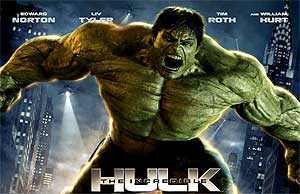 Even in the Hulk's case, there are always karmic consequences. In "The Incredible Hulk", Bruce Banner (played by Edward Norton) decides to exile himself - from those who loathe him and those he loves.

It's no random runaway though, as he diligently maintains secrecy while seeking a permanent solution - for his tendency to morph into the green monster whenever enraged.

Banner tries alternative preventive measures too. He doesn't take the usual anger management courses - since he, of all people, clearly comprehends the damage that an unchecked temper can do. By nature, Banner isn't easily angered anyway. Without his mutant ability to transform, the rate at which he reaches his boiling point is probably not much different from yours or mine. Thus, what he needed were more effective ways to stay cool. For this, he practises breathing exercises to lower his heart rate, so as to suppress anger when it arises.

Banner's retreat was the result of being demonised. However, the military's relationship with him was a love-hate one. As much as they detested his frequent escapes, they wanted to capture him for research - to create super-soldiers impervious to gunfire and disease. However, in fighting a monster, they became more terrible monsters - literally for one case - who replicated the experiment that created the Hulk, becoming the Abomination (played by Tim Roth). A case of "anti-terrorists" becoming terrorists. Dangerous is it indeed, to assume others are dangerous with little grounds.

In the comic book universe, the Abomination becomes one of the Hulk's greatest enemies. While anger generally renders one less kind and rational, the Buddha-nature of Banner within the Hulk shines through once in a while, while the Abomination suppresses his own Buddha-nature by his preoccupation with ambition and power for its own sake. Occasionally, the Hulk is like a wrathful Bodhisattva manifestation when he uses his rage skilfully to save the day. That said, enlightened Bodhisattvas are not fuelled by any inner rage - they just make a show of it to subdue the severely wayward and deluded!

As one of the three roots of evil (or three poisons) in Buddhism, anger is momentary insanity. Maybe that's why anger is called "madness"! A stern warning in the Avatamsaka Sutra says that "a spur of anger rising can burn a forest of merits". Such is the destructive nature of anger, that hurts oneself first. Banner even describes his rising anger to be like acid burning in his brain. As we know, provocation of the Hulk makes him madder. Such is the case for ordinary anger too. Push his buttons harder and the Hulk growls in a bestial way. Indeed, we become more animal-like and less human in the moment.

As taught by the Buddha, that "hatred can never be ceased by hatred; hatred can only be ceased by love", it takes the gentle empathy of Betty (played by Liv Tyler) to heal the Hulk from his incensed pain. In Buddhism, loving-kindness, the very opposite quality of hatred, is the balm to sooth it, while fighting fire with fire would only add fuel to the fire. Often, there's no need to "take down" the Hulk. One just has to walk away to let him cool down - for his more rational alter-ego to re-surface. Likewise, before your rage explodes, calm down - or walk away if there's not enough time! Like Banner, our hidden rage is a time-bomb!

While yearning for a cure, Banner faces a moral dilemma. At times, what he transforms into is wholly monstrous, yet other times, this monster is capable of doing great good. With great strength comes great responsibility! When the Hulk persona takes over Banner, he loses the latter's memory and intelligence, while being easily enraged in an unforgiving child-like way. This is another fitting analogy for how anger works - which sees enemies out there, missing the immediate - oneself. Righteous anger is still anger. Justice can be sought without real rage. If only Banner could tap into the Hulk's power while keeping his cool!

On "sex and violence" in the movies, there's a tragicomedic scene of Banner deciding that it was safer not to make passionate love with Betty - lest he gets too excited. Interestingly, both great attachment and great aversion increase our pulse rates. In fact, in Buddhism, they are seen as two sides of the same coin - the double extremes away from the Middle Path of equanimity's calm. Every flare-up (and "flare-down") is digression from the peace of being centred. However, this base of emotional stability is always available for us to return to - whenever we wish.

Banner later takes up meditation to further work on his anger. He ought to practise metta (loving-kindness) meditation to loosen his roots of anger! This is the right direction as physical cures cannot change mental habits in the long run. What you cannot totally rid of as yet you need to control. When he goes into hiding, so does his anger - but aloneness is no cure - as it merely starves the potential of anger from conditions which help it thrive. Will Banner choose to live a peaceful but uneventful life, or live as an alternating super hero and villain? His plight is really ours as well - as long as the seeds of rage lurk within too.