Filmmaker Lara Damiani Speaks About Documentary And The Dalai Lama 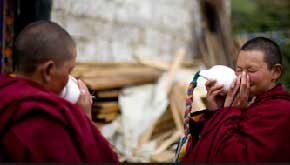 << The Tibet Project aims to raise global awareness through the documentary about the political, environmental and cultural struggles faced by Tibetans.

Damiani, who used her own funds to make the documentary, will raise global awareness through the documentary about the political, environmental and cultural struggles faced by Tibetans.

Though Damiani was always interested in Tibet and the Tibetan freedom struggle, she tells Celebrity News Service that reading a book about the Tibetan philosophies sparked her interest in making the documentary.

"Towards the end of 2006, I started reading 'The Tibetan Book of Living and Dying' and was growing even more fascinated towards Tibet from the perspectives, this time, of their Buddhist philosophies," she tells CNS.

Damiani also felt that with the approach of the Beijing Olympics in 2008, the timing was right to raise awareness.

"I knew that there are still many people in the world who know little of Tibet's recent history and its occupation by Chinese troops. So that was it. I was determined to make a documentary," she says.

The documentary was filmed over a 12 month period beginning March 2007. Damiani got the full support of the Tibetan Government in exile for her production.

Damiani used her own funds to make the documentary, exhausting all her savings and taking out all of the loans and credit cards she could, she says.

"What kept me going was the strong belief in spreading the message, spreading truth and justice," she says. "Particularly after visiting Tibet in July 2007 and experiencing first hand the oppression there, the lack of freedom of speech.... It made me even more determined to use my voice to speak out for those who can't," she says.

During the documentary's filming, Damiani obtained personal interviews with the Dalai Lama and Tibetan Prime Minister in Exile.

Of speaking with the Dalai Lama, Damiani says, "It was awesome. He's so warm and welcoming and he has an incredible energy about him. I love his sense of humor."

While Damiani admits that she was nervous before the interview, it ended up going well.

"The interview was only supposed to be half an hour but it ended up being an hour and the Dalai Lama was really happy to have photographs taken with us," she says.

Damiani was struggling with the finances for her film when she went into the interview, but speaking with the Dalai Lama kept her going.

"When I had my photo taken with the Dalai Lama, I just remember him taking my hand and squeezing it. It was all the encouragement I needed to keep going," she says. "I also remember coming out of that interview with the most amazing energy.... I felt as thought I'd been recharged."

"Lhasang told me that he'd decided not to speak to media for three years because he was frustrated that there was no solution, no result being achieved, and I think he felt that speaking to the media was not helping the situation in the way that he wanted it to," she says.

Damiani's documentary will hopefully achieve results by spreading global awareness about the struggles in Tibet. She says broadcasters from Australia, Germany, Denmark, Switzerland, Latvia, Estonia and Belgium have already expressed interest in the film. She will also enter the documentary in film festivals.

"Of course, I'd love to find a broadcaster in the US who is interested now too," she says.

She also hopes to start education programs to raise awareness of the issue in Australia.

"At this stage we're still in the planning phase but hope to reach secondary schools and universities in the first instance," she says.

Of her most recent meeting with the Dalai Lama, Damiani says, "I was lucky enough to meet him again when he was in Australia recently and got to give him a preview copy of the completed documentary on DVD. That was a fantastic way to end this part of the project, that's for sure!"