"The X-Files: I Want to Believe" I Can Realise the Truth

Singapore -- In the movie "The X-Files: I Want to Believe", the X-Files have clearly gone from being mysterious to being mystical. Its tagline reads - "To find the truth, you must believe." 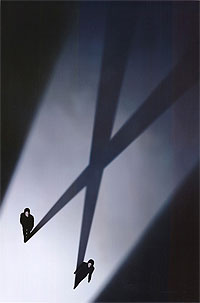 Well, it is one thing to believe one can find the truth, but quite another to believe something to be true before realising it is so. While there can be sound leaps of faith, there can be groundless leaps of blind faith too. While the first might land one's feet firmly on the shore of liberation and truth, the latter might be a deeper plunge into the dark abyss of delusion.

The story pivots upon Father Jo (played by Billy Connolly), who claims to have visions of an FBI agent's abduction. He simply believes his visions to be a gift from an unseen God - though there are many atheist psychics in history too. Is it mind power or God? If there is a supreme giver of visions, why would he or she not give him clearer visions instead of vague glimpses that offer few clues? Maybe if things were so clear-cut, there would be insufficient plot for the story! Isn't God an X-file too? But how can that deemed inscrutable be investigated?

There was a brief scene, where the camera falls upon the portrait of who was dubbed by many to be the worst president in American history. More Americans have died in this president's campaign for "peace", than the Americans who died in the terrorist act that "started" it all. As his picture was shown, the signature tune of the X-Files plays. Was the director trying to say that what went on in the mind of this God-believer is an X-File too? God works in mysterious ways? Via this world's most "powerful" believer of him too? A mystery indeed?

Father Jo was a convicted pedophile (who victimised 37 altar boys), which led Scully (played by Gillian Anderson) to doubt his visions, while Mulder (played by David Duchovny) wanted to believe he was credible. In a dialogue, Scully asked Father Jo what he was praying for. He replied that it was for the salvation of his immortal soul. But if he had an unchanging (immortal) soul that is pure, why does it need to be saved? And if this soul was created by an almightily good God, how could it become corrupted, especially for a "devout" believer like him?

Father Jo asked Scully where she thought his unnatural sexual appetites came from. Scully said it could not be God. He replies that he had already castrated himself at the age of 22, that his urges could not be from him. Does this effectively exonerate him from his crimes? If it does, should all other criminals adamant that their inner demons are not theirs be pronounced innocent too? The good God that Father Jo believed in obviously allows evil to thrive in his world - to the extent of harming at least 37 who believed in him. Who is guilty?

If there is a wise God, why would he deliver any "truth" through a convict - that makes it much harder to believe? Why play so hard to get? Father Jo highlights Proverbs 25:2 - "It is the glory of God to conceal a thing: but the honour of kings is to search out a matter." If God's concealing of things (including himself) is his glory at work, why do God-believers proclaim his glory? Doesn't this lessen it? In contrast, the Buddha proclaims the Dharma as an open truth, as the glorious way to enlightenment (including about matters of gods and demons).

The classic problem of evil asks – "How can a good God create or allow evil?" The problem with this problem is that it assumes the existence of such a God. The easiest solution is that there is no such God who created or allows evil. Evil is instead "self"-created, created from selfish self-centredness. Evil arises from attachment to the illusion of "self". The roots of evil - greed, hatred and delusion all arise from attachment to this idea of "self". Even belief in a greater "self" (God?) is a delusion if it does not truly solve the problem of evil.

Mulder and Scully are famed for "chasing monsters in the dark", which Scully confessed she was done with. It might not be bad to stop looking into the darkness. What matters more is to turn around - to go towards the light of truth - by looking for truth and happiness within oneself. This is the right direction to move. The truth is simple - we all yearn for True Happiness, and it is to be found within, not without. Even when darkness creeps up upon us, we still need to look within to solve the ever-relevant mystery of how to attain True Happiness.

Mulder wanted to investigate, but he wanted to believe the theories he attached to as the truth too. This is contradictory - because a good investigator does not take sides. What he attaches to might be delusion instead. With selective and thus clouded perception, how can one discern the whole truth? In typical X-Files' fashion, the story ends in an inconclusive way - hinting that the truth is still an open mystery. The biggest mystery, till we are enlightened, is still enlightenment itself. Thank goodness the Buddha's teachings lead to it!