How the "Buddha's Lost Children" were Found

Singapore -- As the tagline of "Buddha's Lost Children" (BLC) goes, it is indeed "a breathtaking true story of compassion and tough love". BLT is a multiple award-winning documentary of how a courageous and generous monk (Abbot Khru Bah Neua Chai Kositto) plays surrogate spiritual father to orphaned, abandoned and disadvantaged children. 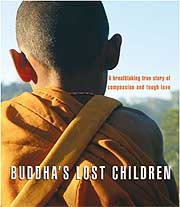 It is truly a life-affirming account of how unconditional goodness and sincerity can thrive in a world that seems so harsh and austere at times.

BLC is the case study of probably the best of creative Buddhist social work in action - with the least of material means. Skilful means are aplenty though. In charge of the Golden Horse Monastery in Thailand near the borders of the infamous Golden Triangle, Abbot Khru Bah is the spiritual mentor and mediator of some 20 villages, most of which are isolated and impoverished by the drug history of the area. His self-appointed mission was to undertake the dangerous but worthy task of ensuring the presence of the Dharma there.

His monastery is the home of some 120 horses saved from slaughterhouses. Cared for with meticulous compassion, he even delays a lengthy horseback trek to a distant village – so as to bless and heal a fallen horse. The Abbot thus teaches his novice monks the importance of loving all beings. As he put it, "Taking care of your horse is like looking in a mirror. Looking after your horse is as important as looking after yourself."

The horses and the children have a symbiotic and interdependent relationship, as they teach one another the value of patience, gratitude and community. It is as if the horses have become an extension of themselves - to care for selflessly. The monks also have a symbiotic relationship with the villagers, some of whom offer alms food and other necessities to them. With no intention to hoard and only to share, it is deeply touching to see the very same monks share their excess gathered alms with poorer villagers.

Although the Abbot uses some unconventional ways to teach life skills to the children, he is deeply humane, forgiving, humourous… and even heroic. One of the methods he uses is to see tattooing as a spiritual test - for the novices who are willing to take it. "Tattooing is a test to see if we can take our minds off our bodies. If the mind remains on the body, it will hurt a lot." He offers his blessings thus when a novice has a completed tiger tattoo on his chest - "May you be a good person, and keep to the teachings of the Buddha. May you have courage and strength, like a tiger. And may your life be strong, with a heart that is true. May you have endurance, authority and honour. May you lead a full and happy life."

The Abbot was a former champion of Muay Thai (a native form of boxing with aspects of spirituality), who renounced the worldly life to tread the spiritual path. Using his expert know-how while removing aggression from the art, he trains the novices in Muay Thai - as a fun form of exercise and self-defense (for the dangerous areas they live in). It also nurtures a sense of humility, confidence, independence, leadership and self-reliance. Meditation is also used for education and rehabilitation for those recovering from drug addiction.

While the novices see the Abbot as their example to emulate, he sees the Buddha as his example. It is important to recall that the Buddha was an educationist too, who offered the Dharma with various skilful means to lead beings to freedom from suffering. He too spoke of the need not just for the Dharma, but of the need for humanitarian relief too. Realistically, it is hard for a hungry person to digest the Dharma!

The Abbot currently hopes the monastery to have a more stable income for building schools, and for employment of full-time teachers and helpers. For information on how you can support the cause of Golden Horse Monastery, please visit www.BuddhasLostChildren.com, where you can purchase the DVD, book and soundtrack of BLC too.