Singapore -- The film "Painted Skin" was adapted from one of the beloved fables from the classic Liaozhai Zhiyi (Strange Tales from a Chinese Studio), which collects some five hundred spooky tales. A timeless classic is one because it still sheds light upon ourselves in an enlightening manner. As such, good supernatural horror stories are really skilful vehicles which warn of the possible horrors of human-nature. This is the truth in fiction. 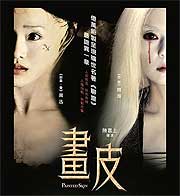 As suggested by the title, a "foxy" demon dons a painted human skin to tempt men. When they get close, she tears out and devours their hearts. It's a literally "heart-wrenching" experience at its possible worst! Yes, it's one of those cautionary tales on not judging someone by their appearance. Those who look human might be heartlessly demonic, while the demonic can transform to be humane too.

Beauty is only skin deep, and the skin is not very deep! What lies beneath might be a can of worms. (Watch the film to see what I mean!) From a broader perspective, while there might be demons in the guise of humans, there are humans who are entirely physically so, while invisible inner demons lurk within their minds. Such demons are so much harder to detect for the unmindful, including one's own!

The demon, who could only associate with humans as sources of "hearty" food became infatuated with a married man. She begins yearning for his love. She seduces him, but he adamantly stays loyal despite being a little shaky in conviction. Jealous of his wife, the demon schemes against her. Meanwhile, the wife knew she was a demon, but could not convince her husband so due to the lack of evidence.

But what is love without trust? Then again, can we trust someone else entirely when we cannot trust ourselves at times? Is the benefit of the doubt always beneficial? There is no clear answer, while it is our onus to discern the truth best we can and to help one another to do the same. The inner demons in this case are suspicion and delusion. Devious indeed these are, both capable of thwarting reality and destroying trust.

The story questions the paradoxical nature of commitment in the face of temptation. If one is already with one's supposed true love, how can one be tempted by another? Unless one's love was not true enough? Or is commitment that despite temptation? Perhaps it depends on what is meant by love. Is it in this context friendship mixed with lust? "Love" is a very generally used word indeed - sometimes tainted with hidden lust; other times without a trace.

Is it infidelity when a married person lusts for another? If so, does it imply that love is supposed to include lust? If one loves without lusting, is it a love more or less true? Or would it be "merely" parental or friendly platonic love? Why do many see exclusive lust for oneself as crucial in an intimate relationship, when it makes it more worldly than spiritual? In Buddhism, true love includes lust-free unconditional loving-kindness concerned with the welfare of all.

What is the cost of love? Does true love sacrifice everyone else in its way, or does it only sacrifice oneself? Does love become lovelier when it sacrifices more of others or oneself? Does true love not truly set the beloved free and rejoice in the beloved being happy… even if it is with another? The demon realised that she had sacrificed everything but herself in her pursuit for "love", which rendered her quest impure.

Not only did the wife love her husband, she cared for the others in the household too, as she agreed to sacrifice herself – only if the demon promised not to harm him or the others. The man loved his wife too, but was tempted by the demon to trust her. He realises his mistake and sacrifices himself for his wife - after getting the demon to agree to restore his wife's life.

The demon was ruthless at first, willing to "sacrifice" even the man's beloved wife – out of love and lust for him, to be with him. Hers was a selfish "love". Though she too yearned for unconditional love, hers was heavily conditioned with deceit and murder. However, in the end, she was touched by the man and wife's love for each other, and sacrificed herself to make amends before it was too late.

On the whole, the script is a dramatic yet subtle study of love and sacrifice. We might not be able to find true love, or love all truly straightaway. But all is not lost. As a Buddhist friend put it, "Love is love. Love might not be totally true now. But love can always become more true." And we know love can eventually be perfected, because the Buddha exemplified it perfectly via his thoughts, words and deeds.