'The Day the Earth Stood Still' in Shock

Singapore -- In the 2008 version of 'The Day the Earth Stood Still', the alien Klaatu, who represents an intergalactic congregation arrives from outer space to deliver his final judgement on humankind. In a cool and composed manner, he asks for a discussion with Earth's leader(s), so as to deliver his last warning. 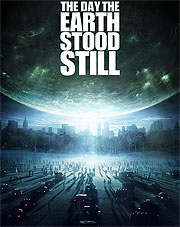 If unheeded, the entire 'parastitical' human race would be wiped out to preserve the planet. But it becomes ambiguous as to who can truly represent Earth when 'leaders' vy for rights to be involved. Does this conflict represent a hopeless Earth?

The original 1951 movie was a not at all subtle take on why the Cold War and the rise of the atomic arms race was senseless. Klaatu was a 'Christ-like' figure with his 'human' name being John Carpenter. Note his initials and occupation! He was accompanied by a giant robot called Gort. An obvious allusion to God? The trinity is almost complete! It was literally a case of 'Believe in Klaatu's message to be saved... or thou shalt perish.' It was either his way or the highway... to unearthly 'hell' on Earth.

To show how serious he was, the dispassionately portrayed Klaatu brings the mechanised powers to a halt, but is seen as a serious threat instead. A natural reaction, albeit not definitely wise? Colder still is the silent but threatening Gort. Klaatu's reasoning is direct... a little too 'black or white' in fact - 'If the Earth dies, you die. If you die, the Earth survives.'  A dire warning still, on why much humans should stop terrorising one another and the environment. Technology is clearly not in lack, but human will to change is.

Did Gort and company exhibit appropriate 'tough love'? Well, the value of the planet was seen as greater than that of human lives. As the story progresses, we see Klaatu becoming increasingly 'humanised'. He learns to be genuinely compassionate and generates faith in the good side of human-nature. Eventually, he gets Gort to call off the process of destruction. But isn't the 'trinity' one in essence? This is reminiscent of the 'paradoxically' (or contradictingly) wrathful God in the Old Testament versus his much gentler 'son' in the New Testament?

Klaatu learns to empathise, to be compassionate. He learns to not just be a 'friend of the Earth', who came to save the Earth from us; he learns to befriend Earthlings too. However, his very presence was cause for much panic, 'urging' the masses to rush madly to evacuate UFO occupied cities, clambering for food and fuel. In the end, there is only one race - the human race... racing for 'salvation'. The film is still a good wake-up call for our times. Then again, the backlash of environmental mayhem should already be warning enough?

A fellow resident alien who had been assessing humans for 70 years decides not to evacuate from the planet, even if Klaatu's verdict is to obliterate the human race. This is so as he had learnt to love humans, with warts and all. Is he more evolved than Klaatu, now that his compassion had widened to include those with shortcomings? Was Klaatu really an advanced being in the first place? In Buddhism, advanced Bodhisattvas, who are Buddhas-to-be, 'hang out' with the unenlightened as they do their best to enlighten them; they are not judgemental.

Klaatu says that his body is human, that it feels pain; but he isn't human. Doesn't that give him less rights to judge us? He is surprised that humans consider the planet theirs. Good point - we are merely guests; the planet will outlast us. But it's also surprising that he lords over humans' fate when it's not 'his' either. In the 1951 film, Gort was created by a race of robots to maintain peace throughout the galaxy. But how can peace be created by unforgiving 'hellfire'? That said, Gort was really a fictitous concoction of the human mind.

Did Klaatu save humanity in the end? Not exactly. One particular human saved the day - the one who care for him, who showed him that not all humans deserve to be annihilated, that there is a better side to humanity. It was this single human who tipped the scales back, who changed his mind, who helped to urge other humans to change their minds too. Our planet is near the environmental tipping point towards total chaos. Civilisations either collapse or make a (r)evolutionary quantum leap at this point. What will it be? We decide; not Klaatu or Gort.