Singapore -- 'Underworld: Rise of the Lycans' is the instalment of the trilogy that explains how the lycans (werewolves) were enslaved by the vampires in the first place, and how the the first came to rebel against the latter, thereafter becoming enemies. The master-servant relationship between the vamps and werewolves respectively are really chock-full of the ironies of rationalisation. 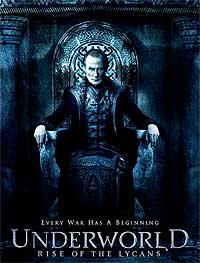 Victor, the head of the vampires commented that he expected loyalty from his daughter, without which they, as a clan of vampires would be no better than mindless beasts. He was referring to the lycans, that they had enslaved to protect them from vampire-hunters. But who are the real beasts? Those who are relatively more mindless but enslaved, or those who mindfully enslave to exploit them?

Now, in place of the word 'beasts', feel free to replace with any supremacist band of beings - non-vamps included - human beings. Doing so helps us to see the slavery problem in a larger context. While watching the movie, I kept seeing the vamp-werewolf relationship as an apt parallel of the human-animal relationship. Domestication of animals for meat, produce and labour is really slavery in most parts of the world.

The animals are condemned to a life sentence that ends with a death sentence when they are deemed fully exploited. Though the lycans are more bestial physically, the vampires are more treacherous mentally, despite having more cultured appearances. If not, they wouldn't be able to trap, control and breed the lycans for their selfish benefits. Isn't this exactly the case for how humans relate to most animals deemed useful enough for their own ends?

One of the elements that led to the successful rebellion of the lycans against the vampires is the latter's underestimation of their sentience and intelligence. The lycans, like any other animal, are not incapable of thought and feeling. Lucian, the lycan leader discovers his ability to tame and direct the wild (were)wolves to some extent. This was to his surprise too - that the beasts can be less bestial and more rational. While Victor led the werewolves to obey by might, Lucian inspires them to fight for freedom from oppression.

Slaves of every kind can evolve both ways... to be further enslaved... or to eventually break free. While I tend to root for the underdogs, I hope there won't be a day when domesticated or caged animals successfully rebel against their human captors. It is possible to co-exist in harmony. Then again, there have been individual cases of animals overpowering humans throughout history, albeit not wrecking havoc en masse till entire governments are toppled!
TOP