7 Lessons from 'He's Just Not That Into You'?

1. Some express aversion to those they have attachment to – because they are intimidated by their own attachment, such that they try to reverse it, to reject their attachment. What they really have is aversion to themselves, not the other. Why not try to cultivate equanimity beyond the extremes of attachment and aversion instead? 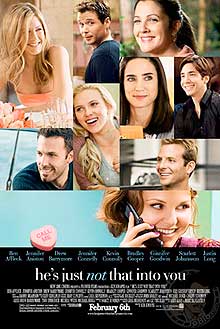 3. Should a couple stop being together or nice to each other if they are not going to marry, lest hearts are broken via failed expectations? If they agree so, they must love marriage more than each other! Why let marriage be the third party? Doesn’t this reduce the possibility of willing and happy marriage instead?

7. Friendship that is conditional might seek more than friendship itself - when it wants to become love. If so, such love is also conditional. As such, most worldly love is still conditional. Neither marriage nor singlehood guarantees lasting happiness. Maybe there is no happy ending with another for everyone. Maybe it is just you, moving on. Because True Happiness is unconditional, it is not conditioned by being married or single. This is really good news for all – whether single or not!
TOP