Drag All Out of Hell

Singapore -- In ‘Drag Me to Hell’, a girl who was just living another day in relative paradise before she encounters an old gypsy woman. Having offended her by not helping her enough, she gets hell in return. 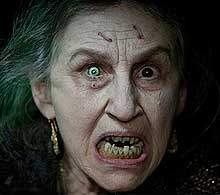 A vicious curse makes her life a living hell for three days, before dragging her to an actual hell. Be mindful of how you interact with everyone, lest you stir up vengeful hate!

She had decided not to help the woman, not out of spite, but to show assertiveness to her boss, to let him see that she deserves a promotion. She decided not to listen to the woman’s pitiful pleas, to much regret. Well, on the way to your greater worldly paradise, don’t forget to be compassionate to others! Real paradise must be for all, not while neglecting others in ‘hell’.

Her torments began with a nightmare she couldn’t wake up from, to which her boyfriend comforts her later, ‘It’s okay. It was just a dream.’ The worst curse is having a tormented mind. Even if the suffering is not real, the mind can make it seem so. In this sense, we all experience personal hells from time to time, as long as we are haunted by delusions not awakened from.

To break her curse, she had to pass a cursed object to someone. She tries to find someone who seems to deserve it, but to no avail. She realised that no one deserves eternal hell – including herself! It’s not mentioned if the hell in the curse is eternal, but being an American movie, we can assume it is so as Western films seldom advocate a temporal hell.

Suddenly, it struck her that there is only one person who seems to thoroughly deserve the curse. That person is none other than the one who cursed her. The punishment sentenced upon her with grossly unfair weightage is reflected upon its creator, the one who sinned the ‘original sin’ of promising an impending eternal hell with no hope of redemption.

Do we seriously believe that anyone deserves eternal damnation in the afterlife for the limited evil they have done? Chances are, no – especially when even true repentance will be useless. Do we really believe there is a just creator of infinite good who would create and sustain a world of infinite suffering? Wouldn’t that be creating and passing down the truly ‘original sin’?

In Buddhist cosmology, there is no eternal hell due to the limited nature of one’s evil. Karmically self-created hellish experiences might feel like eternity in the moment though. However, there are compassionate Bodhisattvas tirelessly trying to empty the hells, to alleviate suffering by teaching hell-beings how to swiftly exit the hells for better rebirths. Phew!