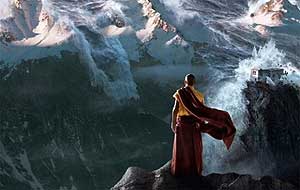 The First Realisation is the awareness that the world is impermanent. Political regimes are subject to fall. Things composed of the four elements [earth, water, fire and wind] are empty [of lasting substantiality], containing within them the seeds of suffering…' (http://plumvillage.org/practice/discourses/58-discourse-on-the-eight-realizations-of-the-great-beings.html) Indeed, our true refuge cannot be in the fickle elements or even great nations; it must rest upon the personal realisation of immutable truths, which would set us free. The film '2012' bears testimony to this.

'2012' is arguably the melting pot of many disaster movies. It proposes that due to alignment of heavenly bodies in our solar system, there will be a sharp increase of solar activity, which would create havoc at the Earth’s core, causing its tectonic plates to shift, along with its poles. But since the current climate crisis is already more than enough to tear the Earth apart via increasingly violent and more frequent earthquakes, floods, tornadoes and such, what sorely missing from the movie extravaganza was the message of the urgent need to pull back our human destruction of the environment by being more consciously green.

During the recent Asia Vegetarian Congress, Dr Art-Ong Jumsai, who was involved in NASA’s Viking Space Project, proposed that due to the meltdown in the Arctic, there could be more earthquakes and tsunamis from the shift in weight of flowing ice, which puts pressure on the tectonic plates. What does this have to do with vegetarianism? Meat-eating produces more greenhouse gases than all the motor vehicles in the world combined! Instead of proposing what we can do to save the world, '2012' focuses on the idea that we can do next to nothing. That's not very helpful, especially when there might be movie-goers who leave the theatre feeling haplessly apprehensive about an 'impending doom'.

Anticipating worldwide disasters, governments begin a race against time to fund and build giant arks as vehicles of salvation to tide through the greatest flood ever - for the rich, influential and those with good genes. Strangely, nothing was mentioned about saving the good. The arks are clearly inspired by the biblical one. However, according to the book, there is supposed to be no more monster floods; though there are still many ongoing killer floods in history. With multiple arks built without divine instruction, and them being much larger than the 'original' one, does this imply that humans are wiser and kinder in wanting to save more? With masses in fervent prayer killed, does the story hint of the absence or rage of any almighty one? There were also shocking scenes of the statue of 'Christ the Redeemer' being shattered, and 'The Creation of Adam' in the Sistine Chapel being destroyed by an initial crack that separated the 'Creator' from 'Adam'.

Surprisingly, there were clear Buddhist concepts introduced instead. A wise Rinpoche shares a key teaching from the Kalama Sutta on active investigation for the truth with his disciple Nima when the latter voices his suspicions that there is a huge conspiracy going on in the mountains – 'Do not believe in something, simply because you have heard it.' (This is golden advice for those who speculate on hearsay of what's going to happen in 2012!) He then does the classic Zen act of filling the young monk's cup till it overflows and says, 'Like this cup you are full of opinions and speculations. To see the light of wisdom, you first must empty your cup.' He then passes him the key to a jeep for him to go check it out. Nima later flees for the arks with his family and a band of strangers. When asked to send the strangers away, he says, 'I am a follower of our great Lama Rinpoche. You know I cannot do that. We are all children of the Earth.' Indeed, Bodhicitta, that most excellent aspiration based on compassion and wisdom to save all from suffering will be that which liberates us all.

They say that in the worst of times, you get to witness both the worst and the best in humans. A turning point of great selflessness versus great selfishness. While some leave the vast majority 'in God's hands', some 'play God' to do what they can to rescue every one they can – up till the very last second. For what purpose do we strive to continue our kind, if we are to lose our kindness in the process? For us to be a human civilisation, we must be humane and work together in a civilised manner. As mentioned by one of the protagonists, 'The moment we stop fighting for each other, that's the moment we lose our humanity.' At the climax, most of humanity votes for greater humanity. Despite being on many separate arks, we are already one on a spaceship called Earth, that hurtles on through space.

Controversial indeed was the concealment of the truth from the masses, that most were going to die due to the lack of time to build enough arks for all. Is this compassionate or cruel? Even whistle-blowers with good intentions to reveal the truth were killed due to fear of panic and chaos if the 'secret' leaked. But do we not all have the right to know the truth, so as to tie up our loose ends in time, to bid farewell, express gratitude, offer comfort, seek forgiveness…?

Though there is no Buddhist prophesy of any special upcoming event in 2012, I can no longer hide a universally true prophesy. Here is it… Due to impending death and the uncertainty of when it arrives, we might die any time before 2012. We might even pass away today, for life is uncertain, while death is certain. Whether you believe something ill will happen in 2012 or not, it always makes sense to live life fully with the Dharma – NOW. Since Buddhists believe in the phenomenon of rebirth, of both sentient lives and entire world systems, the physical 'end of the world' is to us, somewhat overhyped, while it is end of our spiritual life that is the most truly terrifying. As the Buddha exhorted in his last words, 'Subject to change are all conditioned things. Strive on with diligence!'