What If You Were a Vampire in 'Daybreakers'?

Singapore -- Warning: This is a proper vampire movie, where vampires adhere to the classic rules. E.g. they do not glitter with fairy dust in the sun without bursting into flames during non-twilight hours! 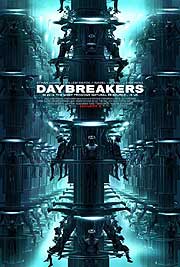 (To avoid confusion in monster lore, Twilight’s ‘vampires’ shouldn’t be called so in the first place!) What if the situation is in reverse? What if vampires are the rule and ordinary humans are the exception? What if you are a vampire yourself? Would you simply be one of the crowd due to peer pressure and your bloodlust, or struggle to abstain from blood? How would you survive?

‘Daybreakers’ tells the future of 2019, when the spread of a virus renders most humans into vampires. Due to craving for blood, so many humans are turned into vampires that human blood becomes a rare commodity – probably like how fresh water is becoming increasingly rare. While the rich and powerful hunt and ‘farm’ humans for their blood like cattle shackled for milk, Edward (played by Ethan Hawke, not Robert Pattinson) chooses to research to concoct something more humane – a blood substitute. Reminds me of the creation of harmless faux (mock) meat to urge weaning off real meat!

If a vampire is no longer a human, does it mean there is no obligation to be humane? But humanity cannot be limited to humans, for even beasts can live in harmony with one another to some extent. What makes us human then? Is it alright to be monstrous just because most are? Might clearly doesn’t make right. Though a vampire or two in our midst might become demonised by us, how would we like it to be the few humans left, hunted by a world of vampires? If it’s distasteful, why should any human hunt, imprison, breed, exploit and kill any animals at all?

The vampires on the lower rungs of society become severely blood deprived, which urges them to feed on one another, leading to a condition where they mutate into bat-like creatures called the ’subsiders’. Despite being the most unfortunate and hungry of the lot, they become demonised by the ‘human’ vampires, though they too were susceptible to their condition. It’s an analogy for present day social discrimination, where the poor and sick become the ‘bane’ of society, ostracised by some of the wealthy and aloof. Monster movies can be very telling of the human condition!

Is it not also monstrous, as a vampire, to prevent becoming more monstrous (subsiders) by terrorising more humans (to ward off the subsiders’ condition), or by exterminating subsiders (who might infect them)? Edward utters, ’Life is a bitch… and then you don’t die.’ What if you are a vampire, who never ages or dies (by natural means)? Would life be endless torture of unfulfilment? Would mortality be a permanent cure? But what about rebirth? Is immortality a disease? Or is endless craving the true one? A long life without physical change is not problematic if there is continual spiritual growth.

The solution to the vampires’ lack of human blood was to end their craving for it. It turns out that the cure is blood from vampires who accidentally reversed their condition to be humans again. Drinking it, the vampires regain their human selves. Now that this is so, that they had lived through monstrous times, will they look back on hindsight with 20/20 vision and regain or even increase their humanity? One of the final scenes depicted vampires biting cured vampires (humans) for blood, thereupon accidentally becoming humans too, who get unwittingly bitten by the remaining vampires! The bitten become biters who become bitten… A ‘bloody’ effective illustration of the viciousness of karmic payback and cyclic craving!