Terror of the Real Cheese Touch!

Singapore -- Based on the book, the 'Diary of a Wimpy Kid' movie reminds me of a phase of growing up that is probably more terrifying than being smack in the middle of the adolescent years. 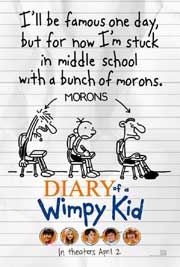 When is that? It's the beginning of the above - that awkward transition when one tries to hasten growing up - cluelessly! This corresponds to the beginning of the middle school years - when one struggles with 'Zen' conundrums like 'Should I just be me? Is it awesome or uncool to be me? Who am I really? Is it cooler to just be me or to follow the cool crowd? But who is really cool?'

Greg, the protagonist kid realises that trying too hard to impress is... well... unimpressive, that being cool is to stick up for your friends, even if they seem conventionally uncool. In short, counter-intuitively, being cool is not being pretentious, self-conscious or full of self, but to be selfless in helping others in need. Of course, it's even more cool to win more friends through this! The 'wimpy kid' realises this and sheds his wimpiness when he decides to remove the dreaded 'curse' of the Cheese Touch and save his friend Rowley from certain shame when the latter was forced by bullies to nibble the nasty cheese.

The Cheese Touch is really a childish 'game', that originated from an accidentally and anonymously dropped piece of cheese on the school's basketball court. Neglected over time, it became increasingly mouldy and disgusting. From the book by Jeff Kinney, 'Then one day, this kid named Darren Walsh touched the Cheese with his finger, and that's what started this thing called the Cheese Touch. It's basically like the Cooties. If you get the Cheese Touch, you're stuck with it until you pass it on to someone else. The only way to protect yourself from the Cheese Touch is to cross your fingers.'

On a graver note, the Cheese Touch fosters senselessly paranoid discrimination, that renders one unfortunate student after another an immediate 'pariah' upon contact, a social outcast. Oh, the cruel games kids play! Incidentally, the Buddha spoke against unfair societal caste systems and supported the 'judging' of individuals by their nobility in thought, word and deed. The Cheese Touch curse needed a hero to vanquish and Greg saves the day by pretending to have picked up and eaten part of the cheese. In a somewhat profound speech on the stupidity of the Cheese Touch to schoolmates who gathered to see him with the cheese, he tells them that he was doing them a favour. Being less 'enlightened', they run away. However, Greg wins back his best friend Rowley.

My take on the real Cheese Touch is that non-vegan and thus dairy cheese shouldn't be 'touched', much less eaten - because of the cruelty involved in manufacturing it. From http://viva.org.uk/goingvegan: 'Cattle reared for milk production are exploited and made to suffer, just like animals reared for meat.

They suffer from lameness, mastitis (inflammation of the udders) and other illnesses and – worst of all – they are forcibly separated from their calves just days after they are born so that humans can drink their milk. Cows are not some kind of special animal that produces milk automatically: just like every other animal, including us, they only produce milk to nurse their young. Male dairy calves, meanwhile, are useless to the dairy industry and are usually shot at birth.' Supporting such cheese is truly a curse for seriously exploited cows! Shun it!