Can 'The Losers' Really Win?

Singapore -- The most enlightening part of ‘The Losers’ was when the cornered Jensen uttered something ‘true to bluff’ those pointing guns at him… (Yes, it’s paradoxical) - ‘In the words of Ancient Tibetan [Buddhist] masters, “Don’t start none… won’t be none.”‘ 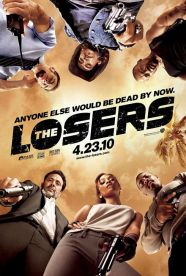 ‘The Losers’ felt compelled to exact vengeance as there were attempts on their lives. If there were no such attempts in the first place, there would be no urge for vengeance… though they could walk away too? Don’t start none, won’t be none. But who started the cycle of hate? At first glance, it is the key baddie in this life, though there might be negative karmic entanglements carried over from a previous life too? (Or would you rather believe there is truly senseless random violence?) It’s tricky deciding who really started it first.

You might think… isn’t it uber uncool to not punish the baddie? Well, there is a world of difference between seeking vengeance to kill and seeking justice without killing. Maybe it’s over-quoted, but it’s still true, what the Buddha taught – ‘Hatred cannot be ceased by hatred. Hatred can only be ceased by love. This is an eternal law.’ If you reflect on this deeply, it’s uber cool!

By the end of the movie, the baddie escapes, leaving room for a sequel. Hmmm… the perpetuation of more hate and damage? Both sides end up being ‘losers’ in the long run… as long as there is the need to run from one another for their lives, and towards one another to take lives.

In the real world, even if the baddie is taken down ‘for good’, guess what? He can spring back to life some day, in another life, reborn. This is the larger meaning of how hatred cannot be ceased by hatred! There should be genuine repentance and/or forgiveness on one or both sides at some point to break the meaningless cycle. In the mean time, remember – What goes around comes around. Don’t start none of the hatred, and there will be none of the hatred!