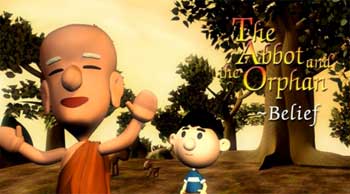 << Valuable lesson: ‘The story is also about how false confidence can lead to great disapp ointment'

It was one of two winning entries under the animation category. The other winning entry was by Prof Kris Megan of Belgium. Over 200 films with Buddhist themes were featured at this year’s film festival.

Ng Lid Sine, director of the Malaysian animated film, was in Colombo to receive the award from Sri Lankan President Mahinda Rajapaksa.

Belief is the second episode in the ongoing The Abbot And The Orphan series that’s distributed by a local Buddhist school.

Ng, 48, says: “The Abbot And The Orphan – Belief tells of Butterfly, the orphan that is always seeking love and acceptance. He eagerly believes that the magic stones will get him adopted the next full moon day.

The story is also about how false confidence can lead to great disappointment.

“A Danish monk tells me that the film brings tears to his eyes. The panel of judges which include mostly Sri Lankan filmmakers and Buddhist scholars also liked the film for its Buddhist content.”

It was the second time an entry from the Buddhist Institute Sunday Dhamma School (BISDS), Buddhist Maha Vihara in Brickfields, Kuala Lumpur, had won an award at the festival. Last year, BISDS’ entry, The Oil Lamp, clinched the first prize in the international short film category.

At the awards ceremony, the 2011 International Sambuddathwa Jayanthi Buddhist Film Festival was also officially launched. It will be held in Colombo from May 28 to 30 next year and will coincide with the 2,600th year of the attainment of enlightenment by Ascetic Siddhartha (Lord Buddha).

The occasion promises to be a grand celebration for Sri Lanka with the planned release of the epic film on the life of Prince Siddhartha. Locations for filming have been identified in Nepal, Sri Lanka and Thailand.

Dr Binari has been engaged to recreate Lumbini, the birth place of Prince Siddhartha, in Thailand for the film.

The organisers hope that the 2011 film festival will be a showcase of the best Buddhist films while projecting Sri Lanka as an international filmmaking hub.

---------
To watch The Abbot And The Orphan – Belief, go to vimeo.com/13170070. To view some of last year’s winning films, go to the website of the Light of Asia Foundation at buddhistfilmfestival.com/vod/.