'Aftershock' of the Human Heart

Singapore -- Though ‘Aftershock’ retells the terrible tragedy of the 1976 Tangshan earthquake which killed 240,000, it is not a typical disaster movie. Its focus is on its tear-jerking aftermath – of the subtle yet sure spiritual aftershocks, of how it tore one family apart, before reuniting them. 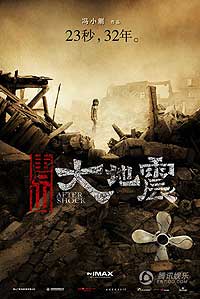 Bereaved of her husband, a mother faced the dilemma of whether to rescue her young son or daughter – both of whom were twins trapped under the opposite ends of the same slab of concrete – in a manner such that to tip one end is to crush the other.

The turmoil in deciding is reminiscent of trying to solve an ‘impossible’ koan (Zen ‘riddle), trying to swallow a red-hot iron ball, that is just as difficult to spit out. Torn but forced to choose due to the race against time, the mother painfully asked for her son to be saved. Unbeknownst to her, the daughter heard her decision, and miraculously survived – waking up beside her father’s body, with her mother and brother nowhere in sight among the chaos.

Imagining herself to be unwanted, the daughter chose to hide her broken heart alone for 32 years. Even when adopted by a loving couple, she pretended not to remember her sorrow, though she could not forget it. Her new parents even urged her to search for her family, but she decided against it. Perhaps, as hinted, it was due to the little acts of what seemed like favourtism her mother did for her brother, which made her doubt her mother’s love for her. Unbeknownst to the daughter too, her mother suffered from overwhelming guilt over the years, for thinking she sacrificed the life of her daughter.

A serious case of misunderstanding indeed, that led to three decades of needless heartache on both sides. This strongly reminded me of how open-hearted communication is the lifeblood of any relationship. The daughter’s wrong assumption was clung to till she put herself in the shoes of her mother while witnessing another mother needing to make the heart-wrenching decision to amputate her daughter’s leg to rescue her in another earthquake, so as to prevent the remnants of a building from collapsing to bury more. Sometimes, we have no choice but to choose… a way out, that is almost as devastating as the alternative.

Despite being widowed for so many years, the mother felt that there will never be another man, who is able to sacrifice his life for her like her late husband did. Yet, paradoxically, she seemed to have made ‘peace’ with this attachment. Who or what do we take refuge in? Is any house truly stable? Is any worldly love truly lasting? So fragile the world is, with its people too. So easily can it all shatter in a sudden quake. So important is it that we ought to have an unshakable spiritual anchor. I choose the Threefold Refuge in the invincible Triple Gem. What about you?

In a scene with fatalistic humour, the grown-up son and his staff were experiencing slight tremors in his company office when he remarks that there is no need to flee due to a minor quake, and that if it is major, it would be useless trying to flee. Sounds pretty pessimistic! What if it turned out to be a medium quake? One wouldn’t know if one had any chance of surviving till it’s over or too late? What would I do? I would nianfo (recite Amitabha Buddha’s name) mindfully to remain calm and clear, while accessing the best course of action. Decisions! Decisions!

What would I do, I wonder, if I were the mother caught in the situation that started the story? I wouldn’t know how to decide who to save… assuming that I truly have equanimous love towards the two children. I would probably pray fervently to the Buddhas and Bodhisattvas for a clue as to what to do. If time is ticking too quickly away, I might even flip a coin to decide. Call it frivolous if you will, but after praying hard, would it not become a desperate but divine lot of sorts? But how to decide who is heads and who is tails? The burden of choice is always ours. May we then, diligently cultivate greater compassion and wisdom from moment to moment, so as to make the best of decisions from moment to moment.

The exit song for the film is a rendering of the Heart Sutra. A prayer of blessing for the many deceased and the still grieving survivors, as it offers soothing solace, reminding us that even life and death is ultimately empty of substantiality, as all is but constant transformation. Just as Tangshan is now reborn into a modern city, even lost loves are never really gone forever.