A Buddhist Vision of 'The Child's Eye'

Singapore -- Before watching ‘The Child’s Eye’, which is dubbed the first Mandarin movie in 3D, I wondered if the horror movie will be all the more horrible with a literally additional dimension…, which also led me to wonder what is the true source of horror. 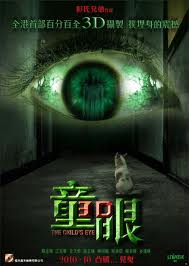 The real horror is when we let our three poisons
of greed, hatred and delusion manifest horribly,
and when we let others’ poisons affect us horribly.

Horror flicks are usually scary only when there are vengeful ghosts involved, who stir up the fear factor. Yes, vengeance and fear are really based on the three poisons. Enlightened ones like the Buddha, who are entirely free of the three poisons, are masters and embodiments of the three antidotes instead – generosity, loving-kindness and wisdom. This is why mindfulness of them is so powerful in warding off evil, as this not only connects to them, it also invokes the same qualities in us to counter and transform the poisons within and without.

In the Buddhist perspective, the movie perpetuates some common Chinese myths, one of which is the romanticised idea that one’s death will surely unite one with the dearly departed… in hell, with a re-materialised paper version of this world. However, hell is truly a realm of suffering, that has no luxury facilities – or it wouldn’t be hellish! As one is reborn in hell only after creating hellish negative karma, not all will go to hell.

To reunite with loved ones in another life, not only must there be some similar karma for there to be affinity to meet. It is true that suicide might lead to rebirth in hell due to the great negative karma, pain, regret and fear generated by killing oneself, but it is a mistake to imagine that such a person will go to hell forever because the corresponding limited karma will eventually exhaust itself. (The movie also mixes up the realm of hell and wandering spirits, as hell-beings cannot wander the human world.)

The easiest way for loved ones to meet one another in the next life is to each aspire for birth in the same Pure Land by mindfulness of Amitabha Buddha (Amituofo). As this creates similar positive karma from purifying oneself of the three poisons while linking to the universal blessings of Amituofo, not only is the suffering at the opposite of the spectrum of existence in hell avoided, there is spiritual bliss instead, that most efficiently facilitates the path to Buddhahood by fully nurturing the three antidotes!

Living Happily Ever After with Your Significant Other
http://groups.yahoo.com/group/thedailyenlightenment-realisation/message/312

Debunking the Top Ten Myths of the Seventh Month
http://groups.yahoo.com/group/zeph/message/1000