Film brings Buddhist nuns' story out of the shadows

Novato, Calif. (USA) -- AFTER A 20-YEAR career as a still photographer, Marin's Heather Kessinger makes her filmmaking debut with "In the Shadow of Buddha," a documentary that takes viewers into the seldom-seen world of Tibetan Buddhist nuns in northernmost India. While beautifully photographed, it doesn't paint a completely pretty picture. 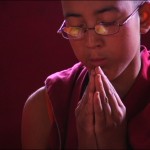 In her first foray into professional filmmaking, the 44-year-old Kessinger shines a light on the shocking discrimination and oppression that nuns have endured for centuries in Tibetan Buddhist culture. Denied education, they have been treated like virtual slaves, waiting on others, serving the privileged monks, laboring in the fields.

To illustrate the institutionalized discrimination, Kessinger quotes one of Buddhism's eight "heavy precepts":

"A nun that has been ordained 100 years must bow down to a monk ordained for only one day."

"Historically, nuns have been of service to their families, or to the monks, or to hard labor," she explained. "They haven't had the cycle of merit and support that the monks have enjoyed. Their

existence on the spiritual path was seen as less than a monk's. And that reveals itself in the film."

Kessinger lives in Greenbrae and works out of a Sausalito studio. While she was a graduate student at the San Francisco Art Institute, she first encountered the world of the nuns in the mountains of Ladakh, on India's border with Tibet, on a trip with noted photographer and teacher Linda Connor, serving as her teaching assistant. She returned every year for the next five years.

"I fell in love with the people and the place," she recalled. "It was just so striking."

One of the issues that struck her was the absence of women in the portrayal of Buddhism in this remote part of the world.

"Don't we wonder where the women are?" she asked. "Are there really Buddhist nuns? What I found, being a filmmaker in the West, was that Buddhist films always focus on the perspective of the monks. Buddhism for us is always seen through the perspective of a man. I'd go to these shows and see these amazing images, but I wouldn't see a single image of a woman anywhere. In every film I'd seen, there was never a woman in a speaking role. "

By making this documentary, Kessinger has devoted the last five years of her life to changing that.

"The challenge was to give these women a voice," she said. "That was the initial impetus, to create a platform for these women to tell their stories."

As the judges noted in the International Religion and Cinema Festival, she has apparently succeeded.

"Through the ageless smile of a group of Buddhist nuns, the director takes us on a journey of faith," they said. "The longing of the older nuns to dedicate their lives to the teaching of the Buddha only becomes a reality through the younger generations. The film celebrates the essence of Buddhism in a scene in which sparkling young nuns debate the value of impermanence."

Since she began shooting "In the Shadow of Buddha" five years ago, this entrenched inequality appears to be on the wane.

As is noted in the film, "Help for elderly nuns is beginning and support for a new generation of women is beginning ... Education has begun."

In its review, Muddy Water Zen says, "For these women, the notion that a woman can be educated and that being born a female is not a punishment of past deeds is currently challenging thousands of years of history."

Old obstacles remain, unfortunately, but Kessinger's film shows women, young and old, who are emerging from past oppression with equanimity and grace.

"What's really wonderful is that these women don't have that perception of inequality," she noted. "They are very devout. They just have love."

To see more of The Marin Independent Journal or to subscribe to the newspaper, go to http://www.marinij.com/.