Singapore -- As usual, reflective of the prevalent Chinese Buddhist custom, the monks in the movie ‘Shaolin’ (which is an independent ‘sequel’ to ‘The Shaolin Temple’ made in 1982) chant ‘Amituofo’ (the name of Amitabha Buddha) a lot, in the face of various challenges, come what may. (This was also the case in the first Shaolin movie!) Also reflective of prevalent erroneous English subtitling, the words say ‘Buddha be praised!’ 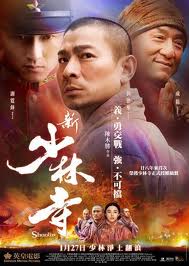 This is an improvement from ‘Oh my God!’ - that I witnessed in another Buddhist film! Who is Amituofo? His name means ‘the Buddha (fully enlightened being) of immeasurable light (of compassion and wisdom) and life (due to his immeasurable merits). ‘Namo Amituofo’, which is also commonly chanted, would mean ‘Praise to, or refuge in Amituofo’.

When fellow Buddhist greet one another with an exclamation of ‘Amituofo’, this expresses one’s wish for another to be aligned with Amituofo’s blessings, and with one’s own Buddha-nature, which is not different from Amituofo’s Buddha-nature. This is why his name is recited both in times of rejoice and empathy, for there is simply no moment when it is not beneficial to be mindful of Buddha. Ultimately, faithful single-minded mindfulness of Amituofo leads to birth in his Pure Land, where enlightenment is guaranteed. So prevalent are the Pure Land teachings that it becomes a catch phrase of the Chan (Chinese Zen) Shaolin monks too. Tragically yet inspiringly, many monks, including the abbot, are featured uttering ‘Amituofo’ as they sacrifice themselves to save the masses.

In the story, a power-crazed warlord, played by real-life Buddhist Andy Lau who wrote the film’s thoughtful Dharma-themed song ‘Awakening’, strives to wipe out every potential enemy, including his sworn brother. Despite the self-delusion that he is in total control, he was really controlled by his immense greed, hatred and suspicion, that gave him no peace of mind. In his words on his enemy, ‘If he does not die, I cannot sleep.’ What he needed to eradicate were his defilements, not anyone else. As his paranoia goes overboard, he endangers his family, the very ones he wanted to protect… leading to his daughter’s death and separation from his wife.

Stripped of his status and wealth, he remorsefully returns to Shaolin for refuge – both in the physical and spiritual sense. He becomes thoroughly humbled by the magnanimous monks, whom he had arrogantly ridiculed earlier. As we can guess, the path to true redemption from his grave negative karma isn’t going to run too smoothly. While he releases his grief and anger through training in the famed Shaolin martial arts, his past returns to haunt him, and he has to confront the archenemy who betrayed him. There is no escape from one’s conscience and karmic consequences! It wasn’t exactly with guns and swords this time though, but with power of the Buddha’s teachings.

Earlier as a warlord, he had budged into the monastery in murderous pursuit of a man. About to kill him, he was interrupted by the abbot, who advised that if only he lets go of his fear (of losing power) and deluded thinking, and abides in kindness instead, he would be able to see everywhere as a Pure Land, thus not ‘needing’ to kill. Rebutting him, he asked the abbot where Pure Land was, since war is raging right at the gates of the monastery. Indeed, this is tension between the ideology of an internal and an external Pure Land. One might be able to abide in peace and calm personally, but what about the countless others in turmoil and those who cause it? Recognising this, the monastery steps up its social engagement with its humanitarian efforts to help the needy.

It is challenging indeed to influence everyone to realise their internal Pure Land, which would make this world an instant Pure Land for all. This suffering ridden world is no Pure Land to most of us, which is precisely why we aspire to be reborn in an actual one adorned with Amituofo’s blessings. Between the desire to escape and that to stay to help is the Middle Path of doing one’s best to make this world a Pure Land, even as one practises to be born in a real Pure Land, so as to train swiftly under the tutelage of the enlightened, and to swiftly return to Samsara to guide the rest to the same liberation. In the Mahayana sutras, Amituofo’s Pure Land is universally recommended by other Buddhas to be the best spiritual school. This explains his great popularity!

The warlord renounces his worldly ways and becomes a diligent monk who finally redeems himself by showing his enemy that he needn’t become the demon he once was, that there is an alternative, by choosing to make peace with oneself and others. In saving the villain from himself, he also redeemed himself from the villain that he once was. In the Shaolin showdown that unfortunately destroyed the monastery, what left indestructible was the Buddhist spirit of selfless sacrifice for the greater good. The story also exemplifies how difficult it is for monastics to steer clear from convoluted human politics. Even Shaolin is not a Pure Land. There is no hard line between worldliness and spirituality. Yet, it also shows how fugitives of unjust law can always take refuge in the laws of the Buddhadharma. ‘Amituofo!’