'The Rite' of Passage to Hell Or Pure Land?

Singapore -- 'The battle against the Devil, which is the principal task of Saint Michael the Archangel, is still being fought today, because the Devil is still alive and active in the world. - Pope John Paul II.' 'The Rite' begins with this quote. Throughout the film, it struggles to show the dualistic tension between faith and disbelief in the existence of the God versus the Devil. 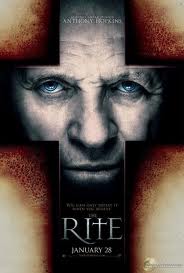 However, the end result is neither very balanced nor convincing either way. Supposedly based on a true story, which in Hollywood also means it is somewhat fictional, it features an apprentice Doubting Thomas*, who comes to believe that God exists because the devil does when he witnesses what seems to be supernatural possession and summons divine intervention.

Yet, this begs the unanswered question of why there must be an omnibenevolent, omnipotent and omniscient creator god just because someone is seen to be severely disturbed by an unseen being. In fact, how can such a deity, if he exists, create or allow the existence of such great evil despite having infinite goodness, power and wisdom? Would that not make the creator ultimately morally culpable for the spiritual mess in this world? And if so, he cannot be truly good and wise. Is it not faulty design to keep creating beings with 'inherited' original sins, who are possessable by evil and fallible? If we were created in the image of God, how can evil ever rear its ugly face through us?

If there is an almighty creator god, why didn't he cast out the original demon once and for all in the first place? Is not doing so not the true original sin of betrayal to all creation? If he could but did not, does that not make him the most sadistic being in history literally? If even he could not vanquish evil, how can anyone else drive the Devil from anyone else? The idea that God chooses who to be exorcists while letting the apprentice struggle spiritually seems sadistic too. If he is already chosen, why not make it easier to fortify his faith by a direct appearance... unless he doesn't exists? Perhaps, when the name of God is called upon for power, it is the power of one's own virtues that is summoned instead. The power of personal truth and goodness can be strong indeed.

Anthony Hopkins, who plays the master exorcist in the film said this in an interview - 'The young priest in the movie says "I believe in the truth." Oh the truth? Lot of trouble that got us into, didn't it, over the past thousands of years? Hitler knew the truth, so did Stalin, so did Mao Zedong, so did the Inquisition, they all knew the "truth", and that caused such horror. Certainty is the enemy.' Dogma adhered to blindly can be dangerous indeed, as the film suggests when his apprentice kept wondering how to differentiate the mentally from the spiritually disturbed. It is unnerving to imagine how many genuinely mentally disturbed people were 'diagnosed' to be possessed in less medically advanced times. He also asks why belief in aliens is considered delusional while belief in God is not.

Hopkins' character also suggests that choosing not to believe in the Devil won't protect one from him, while the Devil, like a sneaky thief, prefers us not to believe he exists. Catholic cosmology subscribes to a list of finite demons with names. Some 125 are listed at http://en.wikipedia.org/wiki/List_of_theological_demons Interestingly, according to the website, 'all [listed demons] have been considered demons by one or more religions, though in some cases, a demon in one religion may be a god or goddess in another.' This revives the fundamental meaning of the word 'demonisation'! Baal, whose name was mentioned in the film is a 'good' example, whose name happens to be 'versatile' in use (see http://en.wikipedia.org/wiki/Ba%CA%BFal) Seems like the 125 demons have been around for a long time, and are repeat-offenders if so. One wonders what is the point of casting them to hell when they just come back unrepentant. Is the name of God not powerful enough? According to Buddhism, unfortunate wandering spirits and hungry ghosts, like gods, can naturally read minds. This seems frightening but it doesn't necessarily mean they have ill intentions. The movie however, sees this as 'knowledge of the unknowable' and demonises them for it!

Also interestingly, in the same list, there is only one 'Buddhist' demon listed - Mara, though he has a 'changing cast' of usually unnamed minions (various minor maras with an uncapitalised 'M'). From an earlier article 'Sympathy for the "Devil"'... 'I find the Buddhist concept of Mara or "The Evil One" very intriguing. Often, Mara is explained in an over-simplified way as the Buddhist version of the "classical Devil". But he is much more interesting than that. Mara represents the greatest evil of beings in the planes of existence. As a specific being, Mara dwells as a god in the highest of the heavens in the realm of desire. No, he does not rule the hells as a fallen angel. In fact, his merits from doing good in previous lives were so strong that he deserves his position as the "devil (demon) king" of that heaven, where he indulges in sensual pleasures and schemes against the spiritual. How is it this possible? Well, despite having done much good in the past, Mara greatly lacks wisdom presently, thus still nursing overwhelming greed and hatred - this is why he is evil. He is said to personally harass practitioners of the Dharma, or through his subordinates - so as to dissuade them from practice and to provide obstacles to prevent the attainment of Buddhahood. Inevitably, the Buddha himself faced and conquered Mara on the night of his enlightenment.

'Though he has a long life, Mara is not always the same being. "Mara" is more like a title, not unlike "King". What happens when Mara is reborn elsewhere? Well, the next "better" (read: worst) player "inherits" his position! Surprisingly, in the suttas, it is revealed that Mogallana, one of the most outstanding disciples of the Buddha, was a Mara in a previous life! Thus did he know his devious ways to disturb serious Dharma practitioners. What is the lesson here? If we do not thoroughly uproot our roots of evil (greed, hatred and delusion), we might become meritoriously powerful but spiritually corrupted like Mara! We might come to be a "shining" example of evil - becoming Mara or one of his minions! Yet at the same time, there is hope for the worst of us, even for Mara - since his state of evil is not permanent. He can transform for the better, should he repent his ways. He can even become a Buddha in good time! Yes, even Mara has Buddha-nature!

'You might worry, "Oh dear! So Mara is "real"! What if he brings havoc to my spiritual life?" Since Mara is the personification of evil, he can only harm us as much as our succumbing to our own evil - to our inner demons, or rather, our inner Mara. Every time we give in to our greed, hatred and delusion, we become more "devilish", becoming more and more likely "henchmen" of Mara. Thus, when we guard against the proliferation of our defilements, and cultivate virtues like generosity, compassion and wisdom instead, we are already armed with the best defence against Mara. While the enlightened ones are pure - beyond good and evil, no one unenlightened is intrinsically good or evil - not even Mara. Yes indeed, the real evil is not out there, it is always within us. Since even the "evil" workings of the "outer" Mara and our inner Mara can be seen as motivators for us to advance towards enlightenment, what (or who) is really "evil"? Not recognising this! Let's even have compassion and aspire to "save" the "Maras" we encounter in everyday life!'

There are many gods and demons in many cultures and religions. Likewise, this is so in Buddhism (though it does not subscribe to a creator god, partly due to the many reasons above). In fact, there is no fixed number of gods and demons - as dependent on how many beings do much good to karmically deserve to be reborn as temporal gods, or much evil to become demonic. That said, Buddhists do not practise exorcism in terms of banishing unseen beings to hell. Counselling is done instead. Buddhist exorcism does not aim to kill, trap, hurt, or chase away harmful unseen beings. Prayer and meditation is carried out for the purpose of persuading the spirit to leave the body. Buddhist exorcism aims for win-win situations for the involved human and spirit - who are seen as two parties negatively affected by grudges that require peaceful negotiation. Restless and even angry spirits should be offered spiritual refuge too.

In fact, Buddhists try to guide the disturbing being, who is essentially a spiritually disturbed being, to take a good rebirth, the best of which in Amitabha Buddha's Pure Land, where eventual enlightenment (liberation) is guaranteed. With so many exorcisms in history and in present day, it shouldn't be mistaken that the demon list above is exhaustive, or that they can be removed only in the name of any specific god. Still, there is some sense in 'naming the demon', which is recorded in Buddhist suttas too, where Mara is often recognised. Names are powerful because we, including demons, cling to our names. Just as a stranger who calls your name holds a certain power of attention over you in the moment, the naming of demons stands for the the recognition of our inner defilements (more so than actual unseen beings). Knowing how we are spiritually defiled makes it easier to purify ourselves. In Buddhist exorcism, the name of Amitabha Buddha ('Amituofo' in Chinese) is often used via repeated chanting, whether one knows the name of the spirit or not - as sincere mindfulness of Amituofo offers instant protection for the affected. Via the same practice, when restless spirits are faithfully mindful of his name, they can connect to him and ride upon the power of his compassion and blessings to reach his Pure Land. Amituofo!

* From Wikipedia (http://en.wikipedia.org/wiki/Doubting_Thomas): 'Doubting Thomas is a term that is used to describe someone who will refuse to believe something without direct, physical, personal evidence; a skeptic. The term is based on the biblical account of Thomas the Apostle, a disciple of Jesus who doubted Jesus' resurrection and demanded to feel Jesus' wounds before being convinced (John 20:24-29), although the Bible does not mention if actual contact took place. After seeing Jesus alive and being offered the opportunity to touch his wounds, according to the author of the Gospel of John, Thomas then professed his faith in Jesus. For this reason he is also called Thomas the Believer. The biblical account then reports that Jesus said, "Blessed are they that have not seen, and yet have believed." This account of Thomas does not appear in the three synoptic Gospels.'