Sounds of silence at Buddhist sites in Odisha, Ratnagiri-Udayagiri-Lalitgiri

Ratnagiri, India -- Hat patience is indeed a virtue is something a history buff discovers while exploring Odisha. In Puri, the pandas dominate, cajoling a visitor to perform ceremonies which he is not even remotely interested in. In Konark, a visitor needs to get through a swarm of tourist guides, each ready with his own interpretation of the place's history. In Raghurajpur, people are more polite. They only follow you everywhere, each politely asking you to come to his home and view his paintings. 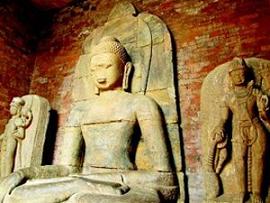 If all these chattering Homo sapiens who come as a package deal with the regular tourist beat tend to put you off, take a break. As I did. And I headed for a hidden delight of Odisha - its Buddhist heritage at Ratnagiri-Udayagiri-Lalitgiri, known as the 'Diamond Triangle'. Ratnagiri is 70 km north-east of Cuttack in Jajpur, just like Udayagiri, and Lalitgiri is a part of Cuttack.

I hit the road and went north, leaving first Puri, then Bhubaneswar and even Cuttack behind. Swinging off the highway after Cuttack, I took the road to Paradip on the coast. Another diversion left of this highway transformed the experience. The smooth, wide road became a shade uneven and a bit narrow. But I was so busy admiring the vivid greens and blues of the countryside that I didn't feel the change in the surface. The curving road passed tree-covered hills, traversed lush fields and forded blue water streams.

And then, just as I began to get over the journey and begin thinking of the destination, it arrived. Ratnagiri.

It is an ancient Buddhist site where excavations happened between 1958 and 1961 and revealed the presence of a flourishing monastic settlement. However, except for the Odisha Tourism and Archeological Survey of India signposts, a visitor would miss the place entirely. From a distance, it is just another hill, part of the range called Assia that dominates the area.

Ascending the hill, I came across hundreds of small votive stupas, rock cut sculptures and other remains spread throughout the area. The focal point of the hill was a large monastery whose ceremonial gateway was the highlight of Ratnagiri. The door - an opening formed out of a chlorite frame in the wall - was quite small but the rich rock-cuts that surround it make for spectacular viewing.

On both sides of the door and on the nearby walls were iconic representations of various celestial beings. The expressions on their faces are curiously life-like, their closed eyes a reflection of the monks who would have lived here once. According to a description on the ASI website, this ceremonial gateway is unique and forms the high point of Buddhist decorative art in India. Entering the monastery, I almost expected to find the monks seated at prayer.

An Abundance Of Buddhist Treasures

In their place the monastery, however, was a large number of rock cuts that the ASI has gathered from the excavations around the site and stored here.

The first thing I saw on entering the monastery was a huge head of the Buddha on the left. Going by its size, it would have been interesting to know what the full size of the idol would have been. In the cells within the monastery too, there are some life-size seated Buddha idols. The largest such idol is in the central sanctum where Buddha is flanked by idols of Padmapani and Vajrapani, Buddhist figures. The large courtyard formed by the monastery walls also has some small shrines.

This central monastery at Ratnagiri is the site of the mahavihara or major monastery whose presence here is indicated by historians. That makes it a very, very special place. According to some Tibetian texts, the Ratnagiri mahavihara was a centre of the Tantric form of Buddhism. Excavated remains from this site are believed to bear a close resemblance to similar remains found in Java and Sri Lanka.

While most of the architecture at Ratnagiri dates between the 8th and the 10th centuries, it is believed to have been a flourishing center of Buddhism as far back as 639 AD when Hieun T'sang , the Chinese pilgrim passed through the region. Apart from the main monastery, there are remains of some large stupas and at least one more monastery. Rock cut icons are everywhere. The ASI-run museum at Ratnagiri also offers a visitor a glimpse of the region's rich past.

Ratnagiri is not an isolated site. It is one of three known excavated centres of Buddhism in the region - all tlocated on hill slopes in close proximity to each other. According to some historians , there are four more sites around but those await further excavation. While driving back to the main road that goes to Paradip, another diversion brought me to the second of the Buddhist sites: Udayagiri.

While the first excavation at Udayagiri happened in 1958 (the same time as Ratnagiri) excavations there continued at regular intervals, the latest one lasting from 1997 till 2000. The result is an incredible treasure trove of Buddhist artefacts spread over a much larger area than the earlier site that I had visited.

A longish walk on a track bordered on either side by thick bushes brought me to the first excavated site. Remains of votive stupas were everywhere, some small, others large. Here and there were scattered monasteries too.

The Udayagiri-1 site, as the first excavated place is called, spreads from one hill through a depression below onto the next hill. Tramping through the undergrowth , I was awed as much by the extent of the remains as by the silence of the place. Here, far from the noisy faith of Puri and from the chaos of Konark, is Odisha's true soul, a silent link to its Buddhist past.

Udayagiri-2 , the second excavated site, has a few scattered stupa remains. One in particular is notable for Buddha representations in niches on its outer walls. On a gateway nearby is the figure of a being swinging on a rope. The eyes are closed and the person is in bliss. The rock-cuts here took me away from the real world into the bygone era of the Buddhist monks who lived and worshipped here. Leaving the place is a wrench but at least the magic of the place lingers till much later.

But before coming away, I did visit the third site, at Lalitgiri on the other side of the road to Paradip. The hill on which Lalitgiri sits is higher than the other hills, at least to a casual climber. The vegetation is thicker and here and there, I could hear creatures slithering in the undergrowth!

For quite a while during the ascent up the hill there is nothing to indicate that heritage lies hidden close by. But up on the hill, I stopped and stared. Everyone does. A massive banyan dominates the vista.

It has grown to such an extent that multiple branches have taken root themselves while the old patriarch continues to hang to onto them, refusing to let go, much like a strict grandfather holding back recalcitrant children.

Below the banyan the votive stupas begin to make an appearance again. On the other side of the gigantic tree and its descendants, is the base of a massive stupa. This site was the subject of an excavation that began in 1985 and continued with full intensity till 1992, and has been examined off and on ever since.

The findings at Lalitgiri include an incredible relic casket containing bones, believed by some historians to be of Gautam Buddha himself. The relic casket comprised four containers one inside the other, each layer made of khondalite, steatite, silver and gold respectively. The casket, of course, has been shifted to a safer location than the lonely excavation site.

The highest point of the Lalitgiri hill, accessed by a flight of steep steps, has a brick stupa on it. Centuries ago, Lalitgiri was the focal point of a Buddhist university called Puspagiri, the other two sites making up the rest. Huien T'sang described the stupa at Lalitgiri's highest point as emitting a brilliant light due to its sacredness.

While I did not see such a light, the sounds I captured then, standing high above a carpet of green fields, stayed with me long after. But then, the sound of silence is hard to forget...