Yongju, Where the Essence of Buddhism, Confucianism Blend

YONGJU, North Kyongsang Province (South Korea) -- My cousin Lee Nae-yun and I wanted to make a special memory before she went to Chicago for graduate school this fall. While I indecisively surfed the Web looking for exciting places to go, Nae-yun suggested on more than two occasions that we go to Pusoksa Temple in Yongju. 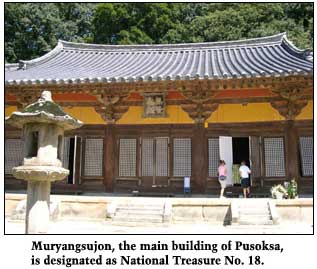 Pusoksa is familiar to every Korean who finished high school. Built by the great Buddhist monk Uisang in 676, the temple is introduced in high school Korean history textbooks as one of the oldest wooden buildings in the country.

Boasting an over 1,300-year history, the temple has a plenty of legends to tell. How the temple got its name is also legendary.

Uisang, the monk who founded Pusoksa, met Lady Sonmyo while studying in China during the Tang Dynasty. Sonmyo admired him but he had to return to his mother country. Sonmyo jumped into the sea and died, but she was reborn as a dragon.

The dragon followed Uisang to protect him on his way. When pagans tried to stop him from building the temple, Sonmyo made a huge rock float three times to scare them away.

Thus the temple got its name ``pusok,’’ which means floating rock. The huge rock is still there by the main building. The rock is believed to be afloat.

``To verify this, you can place a string underneath the rock and push it in any direction. It won’t be met with any resistance,’’ explained Nae-yun, who had already visited the temple several times.

The most famous among them is Muryangsujon, the main building designated as National Treasure No. 18. Many art historians and essayists have lauded its elegant design.

Other National Treasures include the Stone Lantern in front of Muryangsujon, dating back to the Silla Kingdom (57 B.C.-A.D. 935), the clay Buddhist statue, the Chosadang building, where Uisang used to undergo ascetic exercises, and its mural. You will find a tree under the Chosadang eaves. Legend has it that it was Uisang’s walking stick, which he planted before leaving for India.

Having seen the mural and the wooden Sutras at the temple’s museum, we hurried to eat the temple lunch offered from 11:30 a.m. to 12:30 p.m. A dozen people were already there for ``the simple food for the good life.’’ The menu changes everyday, but it is always vegetarian. After finishing the meal without leaving a single grain on the stainless steel food tray as they do in temples, each person is expected to wash his or her own food tray.

Appreciating the Sobaek Mountain Range standing in layers, we walked down the stairs of the temple. Apple trees lined the way, ripening red. Yongju has become a popular producer of apples. Taegu, a city about two hours south, was famous for apples but apple producers are moving north because of global warming. The midland, such as Yongju, Chungju and Munkyong, now dominate the apple market.

Apple stalls are everywhere in Yongju. We stopped to buy a box of apples, which cost only 10,000 won. I never knew that where apples were harvested would make such a difference in taste. Yongju apples were excellent. Abundant sunshine, dramatic differences in day and night temperatures, the ideal altitude of the region located at the Sobaek Mountain Range’s foothill and rich soil work together to produce the sweet apples with a solid texture, according to the young lady who was helping her mother sell apples.

Our next destination was Sosu Sowon, the historic Confucian academy. The site was originally for Suksusa Temple of the Silla Kingdom, but it somehow was abandoned. Only its Tangganjiju, or a milestone for the temple designated as the National Treasure No. 55, tells of its Buddhist history.

Yongju is the birthplace of An Hyang (1243-1306), the scholar who introduced Sung Confucianism to the peninsula. The philosophy later became the creed of the Choson Kingdom.

In 1542, the region’s governor, Chu Se-bung (1495-1554), built the academy in honor of An Hyang and the king later named it Sosu Sowon, legislating it as the first private institute in the country financially supported by the king. The elites of North Kyongsang Province gathered and the school produced about 4,000 scholars and politicians during the Choson Kingdom, including such big names as Lee Hwang and Lee Won-ik.

It includes many buildings used for diverse purposes, but this elitist school is cozy rather than overwhelming.

We ate apples in the small forest of the pine trees at the entrance, where the Confucian scholars must have taken a break between classes hundreds years ago. They must have composed poems or held discussions in the pavilion next to the stream, which comes from Mt. Sobaek and flows into Nakdong River. Who would not admire the peaceful life of Confucian aristocrats? ``The only problem is that they need someone else to be engaged in production in their place,’’ pointed out Nae-yun, a sociology student.

Across the stream is ``Kyongja Rock,’’ engraved red with the Chinese letter ``?.’’ After King Sejo’s coup d’etat of King Tanjong, many loyal Confucian scholars of the region were engaged in the restoration movement for Tanjong in 1457. It failed and countless numbers of people were executed and drowned in the stream. Their ghosts cried every night from the stream. Governor Chu inscribed the letter, meaning respect in their comfort, and no more cries were to be heard, according to legend.

Next to Sosu Sowon is Sonbichon, where a village of Confucian scholars has been reproduced. You can enjoy traditional food and spend the night there to experience the past.

Before heading back to Seoul, we dropped by Pungki Ginseng Market. The region has been specializing in ginseng ever since Chu Se-bung suggested it for the economic prosperity of the region. If you like kalbi, you should visit Pungki Ginseng Kalbi (054-635-2382), located about 1.2 kilometers from Pungki Interchange to Pusoksa. The restaurant specializes in kalbi marinated in a sauce made from ginseng and other oriental medicinal herbs.

To get there from Seoul, take a two-and-a-half-hour bus ride to Yongju from Tong Seoul Bus Terminal. From Yongju Bus Terminal, get on a bus to Pusoksa Temple. (On the way to Pusoksa is Sosu Sowon Academy.) For more information, call the culture and tourism bureau of Yongju City at 054-639-6391.