BANGKOK, Thailand -- Bangkok, just like any other metropolis, is full of diversity, but the Thai capital takes it to the extremes. Some will remember a city filled with beautiful temples and shrines. Others though remember it as a city with a lucrative sex industry, best represented by the red-light district of Phatpong. 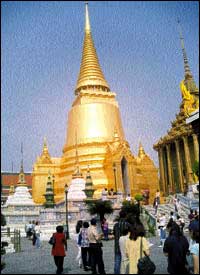 What you get from the city depends entirely on your taste and choice, but this city of two faces does have several "must see" sights for first timers that are included in almost any tour of the capital city.

Built by the first king of the Chakri dynasty in the late 18th century, the Grand Palace is definitely on top of the list.

The present Thai king doesn't live there, but the Grand Palace still remains the most popular attraction of the city, with impressive buildings uniquely blending Thai and Western architecture.

Located in the very heart of Bangkok, the palace is so richly and intricately decorated that, upon entering, visitors will feel as if they were in a real wonderland.

The Buddhist relic was first discovered in 1434 in Chiang Rai. Back then it was covered with plaster and thought to be an ordinary Buddha image. Later, however, the abbot who had found the image noticed that the plaster on the nose had flaked off, revealing the green stone underneath. People initially thought that the stone was emerald, which is why the image is still called "the Emerald Buddha."

Immediately south of the Grand Palace lies Wat Jetuphon, commonly known as Wat Po. It is the oldest temple in Bangkok, having been established in the 16th century. It was extensively remodeled by the early Chakri kings who made it Bangkok's first center of public education.

Many monuments salvaged from Ayuthaya were installed in Wat Po, but what most visitors come to see here is the huge Reclining Buddha. This gilded statue is nearly 150 feet long and 50 feet tall. Its size is hard to appreciate, since the building housing the Buddha is only slightly larger than the statue.

Wat Po is also popularly known as the main center for the study of Thai massage. You can get a massage from one of the temple's trainees, or learn the art yourself. In fact, the temple tries to retain and transfer knowledge about the entire range of Thai traditional medicine.

Wat Arun, meaning "temple of the dawn," is on the east bank of the Chao Phraya River. One can reach the temple by ferry from the Tha Thien pier, which is a short walk from Wat Po. Renting a long tailed boat from the pier at River City for a two-hour tour of the canals, the Royal Barge Museum and Wat Arun is another popular option.

True to its name, the temple is at its most spectacular in the early morning, when it gets both direct sun and the sunlight reflected off the river. Its spectacular five-spired pagoda is a feature not found on this scale in any other Bangkok temple.

Although the temple is older than the city itself, the pagoda encrusted with porcelain was built by king Rama II, early in the 19th century. The temple turns into a popular festival site during the high tourist season from December to March.

Visiting the three temples during the daytime is highly rewarding only if you can bear the hot tropical sun of the city. Located at the northern end of the Silom Road, Lumphini Park is the right place to take a rest after a full day of discovery.

Named after the Buddha's birthplace, the park is Bangkok's "green lung." Tall trees with long dangling branches surround the huge lake located here. Many of these trees have been transplanted from Thailand's various forests over the years, and some are over thirty meters high.

Bright flowers in delicate tones of yellow and gold dot the few bushes that compete for space with the trees along the water's edge. In the shade under the trees are families and friends having picnics and reveling in conversation. In the morning, thousands of citizens jog and stretch here. It has open-air gyms, badminton courts, and pedalos for heading out into the lake to feed the shoals of huge carp.

The Lumphini Park is open every day from 6 a.m. to 8 p.m., although some sections close at 6 p.m. Located across from Chulalongkorn Hospital, the park is easily accessible by bus. Admission is free.