Introduction to meditation is brief, but lasting

Seoul, South Korea -- Waking up at 3:40 a.m. to the sound of a mallet tapping a wooden block almost the size of a volleyball may not be your idea of a good time, but given that the tapper was a Buddhist monk standing beside a hillside temple in Korea under a shining three-quarter moon and a sky full of brilliant stars made it a bit easier. 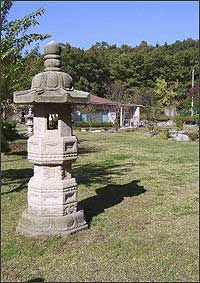 << The grounds at the Center provide visitors a restful setting to spend free time in.
©2005 C. Carpenter

The sound carried down wooden steps, past a goldfish pond, over a vegetable garden and across the lawn to our quarters, where we'd turned the lights out at 9 p.m. the night before in anticipation of rising early. Slowly, 13 of our group of 15 French, American, Korean, Irish and Chinese nationals emerged from our beds and began retracing the route the tapping sound had taken earlier.

We were participants in the temple stay program at the Lotus Lantern International Meditation Center on Gangwha Island. For 40,000 won, we were allowed to spend a night at the temple last weekend and experience a small slice of Buddhist monastic life.

The program included meditation practice, a tea ceremony, a visit to a nearby historical temple, three meals and chanting with monks during ceremonial services. There was also plenty of free time to wander over the temple grounds or through the adjacent woods. The program was conducted almost entirely in English.

During our early morning visit to the main hall, we lined up behind four monks facing statues of Buddha and his disciples. The monk on the right led us in chants using the tapping instrument, or Mokt'ak, as a signal to kneel, rise and let us know when the chant was over.

For the finale, the monk struck the Mokt'ak first rapidly and then softer, like a skipping stone that skips faster and faster until it sinks silently out of sight.

The chants themselves were a medley of the monks' voices staying low within a small range of notes. They filled the temple and washed over the cases on either side of the altar, which contained rows and rows of tiny gold statues of the Buddha holding its own lit candle. The mixture of shiny metal and tiny lights brought to mind the twinkling lights on a Christmas tree.

Above us hung a canopy of brightly-colored paper lotus lanterns, each bearing a slip of paper with the name of someone seeking a blessing. Gazing past the lanterns, you could see carved dragon's heads thrusting from the walls with ferocious teeth and blaring eyes. A white carved bird flew nearby though the lanterns, making it difficult to tell what kind of bird it was.

After a couple of chants we made our way to the meditation hall where we sat on flat, gray pillows facing the walls, while one of the monks sat at the end of the hall facing a statue of Dalma -- the Buddhist figure credited with bringing Buddhism to China. 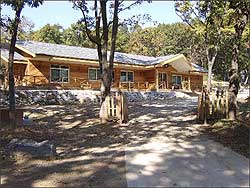 << A meditation hall at the center provides a restful setting to learn in.
©2005 C. Carpenter

Using a split bamboo stick smacked against his palm three times, the monk signaled us to begin meditating. The stick's authoritative smack chased stray thoughts from our minds leaving them clear to concentrate on our breathing.

We were oriented to meditation the afternoon before and we completed one session previously. Our teacher explained that one way of thinking about meditating was to think of a mind with a lot of stray thoughts as a monkey-mind that jumped all over the place. The goal in meditating was to capture the monkey-mind and hold it still. One way to do this was to concentrate on your breathing, either on the rise and fall of the diaphragm or on the wind of breath passing through your throat and into your lungs.

Meditating our first afternoon was difficult. Thoughts of the bus trip to the temple and getting used to a new place lingered, and I never really concentrated. But first thing in the morning, my mind was clearer, making it easier to sit in the half lotus position for 30 minutes without squirming too much.

Leaving the meditation hall and walking back to quarters, an owl called from the woods nearby and another perhaps was answering from farther away. Although with the lowing of a cow, the distant bark of a dog and the sounds of people beginning their days in the communities on the island, it was hard to tell for sure.

We rested an hour before going to breakfast at six. The meal was a large bowl of rice porridge, flavored with potatoes and pine nuts. Side dishes containing toasted seaweed, kimchi and marinated mushrooms rounded the meal out. All three meals were vegetarian. For dinner and lunch we ate freshly prepared soup, rice and a variety of vegetables including bean sprouts, seaweed, fried zucchini and kimchi. The light meals satisfied but didn't leave you feeling stuffed.

Later in the morning after breakfast, one of the monks led us through the tea ceremony, and then we visited the larger, historical Jeondung Temple nearby. We left around noon on Sunday, either driving away in rented cars or waiting for the bus at the end of lane leading to the meditation center.

While the time at the temple had not been packed with information and I didn't come away a meditation expert, the staff and monks at the temple offered small, genuine glimpses into temple life, meditation and Buddhism. Perhaps they appreciate the fact that a little bit of information mindfully given is more valuable than a cascade that would bowl you over. I do know that when I need a little time out of the city again, a temple stay will be at the top of my list.