HAPCHON, South Kyongsang Province (South Korea) -- People drew together for a closer look as a monk stepped forward and began to beat a large cow-hide drum. Our group of friends stood slightly removed from the front of the gathering. In the background, there was a panorama that would take your breath away. 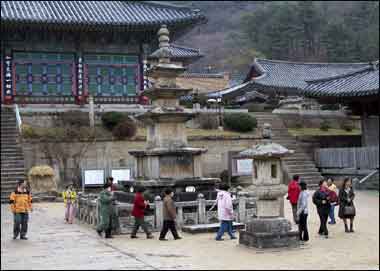 << Visitors walk around the three-story pagoda in front of the main hall Taejokkwang-jon at Haein-sa in Hapchon, South Kyongsang Province.

My friend who is a practitioner of the Buddhism that has been widely practiced here in Korea for about 1,700 years took the moment to ask me a compelling question, which I later came to realize wraps in a nutshell the basics of Korean Zen (Son) Buddhism for beginners.

The look in her eyes was enduring and real. And I didn’t have little clue how to answer this question asked of me at Haein-sa temple.

Haein-sa, located in Hapchon-gun, South Kyongsang Province, is one of the most famous temples in Korea and has received international recognition. It has been acknowledged by UNESCO and has such been designated a World Heritage Site for its housing of the Tripitaka Koreana, a set of some 80,000 carved wooden blocks, among the world’s most complete collections of the Buddha’s teachings.

Our visiting group of 3 Korean and 2 Canadians contained an apt balance of interest and information: judicious guidance from our learned Buddhist compadres and an aspiration to learn from myself and our other Canadian ``temple newbie.’’ We had plenty to do together - nestled half-way up the Kaya Mountain - with what cultural wisdom, a person such as me cannot entirely understand, and such appreciation for life and nature I can’t forget. 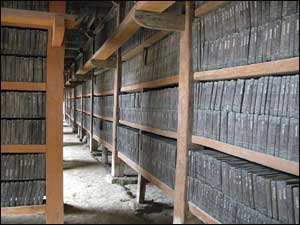 Haein-sa’s history is long; its history exceeds 1,100 years. Its stories remain alive among the river, plants, rocks and trees. The stories are shared by the people who have learned them.

Among and beyond the Buddhist community, the hikers and the nature lovers and history buffs find motivation by breathing the aromas here, in step with the light tread of Haein-sa’s ecological footprint. The vivid images of the area are like reflections from the lens of an artist’s camera.

A flowing stream surrounds the temple. In times past, there was only one small footbridge to enter the temple, to prevent European horsemen from trouncing the grounds.

The founding of Haein-sa is a remarkable story.

In the 9th century, the King’s Queen was ill with a tumor and so the king asked 2 Son Buddhist masters, Sunung and Ijong, to help heal her. They tied one end of a string to the tumor on her body, and the other to a tree. They chanted special verses. The tumor dried away and the tree died. Out of gratefulness for their work, the king built Haein-sa Temple.

Another story occurred during the Korean War. At this time, many guerrilla fighters hid in Haein-sa. A pilot was ordered to bomb the temple. When the assigned pilot flew over Haein-sa’s inestimable halls to complete the duty he was incapable to finish the command. He was immediately court-martialed and imprisoned. After the war he became a national hero.

``Haein,’’ from the ``Avatamsaka’’ sutra, means reflection on a smooth sea. The smooth sea is representative of a world in which all dualities cease to exist.

Our visit to the temple was accompanied by stretches of walking, gracious sight seeing and celebrated tea drinking. Our group drank a lot of tea, sitting in a half-moon circle and passing the vessel around. Fit with an unwavering sentiment to sharing, the taste of the tea was gratifying. We shared tea when meeting someone new. We shared tea as a special occasion between touring the halls, and touring the museum. The tea at Haein-sa, seems to flow like the river outside; regularly and naturally.

Temple Stay sincerely opens a door for newcomers to the Seon Buddhist tradition who want to visit a temple in Korea and do more than just sight seeing.

At the end of our first day, we slept early, in a wide room, on the floor, with small pillows, amid vibrant natural sounds. Crickets create perceptible sounds, and as we lay in the soft darkness the sound of the insects’ music permeated the air. The wind was awake outside passing corners and moving through the temple grounds.

We awoke late for our 3 a.m. chanting and prayers. Like a feeling of tipping the clock over, 3:10 a.m. still felt a breath above early. When we approached the Dharma Hall in the still darkness, the night’s fundamental beauty was at hand. We entered a full hall to find some patches of floor among the many people gathered. Monks and lay Buddhists lined the interior of the hall, as we joined the chanting.

My experiences of Korean Son Buddhist temple life remind me of a similar determination. That is determination not to attain anything per say, but to reveal something: that is, the true nature of identity. A common Buddhist quote is that ``we can see the universe as it is and our true nature when delusion and defilements disappear.’’ And so is the goal of Buddhism; to see things clearly, as they are.

This question, ``What are you?’’ is an initial learning point, a phrase for meditation by Son practitioners. And while I answered the question in a way I thought balanced the depth and simplicity of the question, ``I am an earth creature,’’ the truest Son answer is actually ``I don’t know.’’

As the master on the drum began to hit the rhythm out, the people around us started to enter the Dharma hall for evening ceremony.

The hide drum is representative of earthbound beings and their severance from ignorance, anger and craving, on the road to spiritual enlightenment. The three other instruments within the shared Pavilion represent beings of the sky (gong), beings of the water (wooden fish), and beings of the underworld (bell). And so Buddhist practice is inclusive of beings that are prayed for. No one is forgotten.