The Eyes of Buddha

One of the largest stupas in South Asia, Baudhanath is the pride of Nepal

Kathmandu, Nepal -- From the ancient age to the 21st century, Nepalese have been following three styles of architecture: the Pagoda, Shikhara and Stupa. 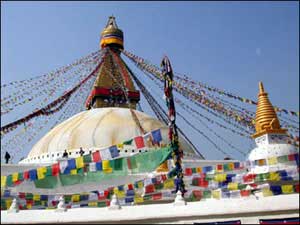 The Kathmandu Valley houses seven UNESCO world heritages sites, among which includes Baudhanath Stupa. About eight kilometers northeast of Kathmandu lies Baudhanath, which is said to be the largest of its kind in the valley as well as one of the largest stupas in South Asia with a height of 36 meters. Baudhanath was made by the Licchavi rulers in the 8th century.

Due to a large number of Tibetan settlers around this area, one can find many Tibetan monasteries. Most of the devotees who come here are Tibetans, followed by Sherpas to some extent. Like the Swayambhunath Stupa, on all four sides of its tower are painted a pair of Buddha's eyes which can be seen from a distance.

The most striking thing about this stupa is the paintings of the mystic eyes. Buddhists believe that these are the eyes of Buddha and are "all seeing" and through them Lord Buddha continues to watch his followers.

From the base of the temple are prayer wheels wrapped with the holy mantra "Om Mani Padme Hum," roughly meaning "Oh, you jewel in the lotus blossoms." Devotees as well as visitors turn the wheel as they round the stupa. According to a Nepali myth, by turning these wheels, one gets the benefit of having recited the holy mantra.

Visitors arrive during the morning and evening. The huge stupa is cleaned from time to time to preserve it in its original condition. The white portion of the stupa is cleaned by white substances and then is colored beautifully in a yellowish form.

According to a local vendor, the colors come in packets from India. The colors are formed after the packets dissolve in water. The packets, made of dry flowers, give a yellowish color after they are dissolved. The vendor said these types of flowers are not found in Nepal.

Due to its location and size, it seems much larger than the Swayambhunath Stupa, with the same hemispherical dome. We can see the complete development of the township around Baudhanath. Curio shops, gompa monasteries and restaurants surround Baudhanath.