Heart and Seoul: Step into life of Buddhist monk during temple stay

GYONGJU, South Korea -- 4 a.m. The sound starts slowly, faintly. It is a deep, melodic clack, almost too soft to hear. It gets louder, faster. Our eyes open and we fumble for flashlights in the dark. 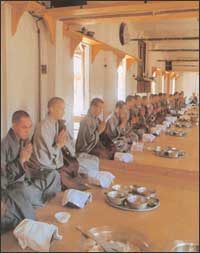 The tempo increases. And comes closer. And now, the insistent clacking of the wooden block is just outside our doors and so strong it seems to pass into our bones.

Wake-up call, Buddhist temple style. We asked for it. We wanted to sample life in a temple - to do the prayers, the chants, the martial-arts training. Maybe to find a bit of inner peace. Perhaps to wander the forested grounds. And definitely to watch experienced masters practice Sunmudo, a physical art that makes movie kung fu tricks look so lame.

It’s not like Buddhist temples haven’t always welcomed guests. But this is different. At Korean temples, you are not just a boarder but a participant.

The schedule - and the rules - tacked up on the wall of the communal bedrooms include chanting and meditation, Sunmudo training, a tea ceremony, a session of 108 bows and more chanting. Lights out at 10 p.m. Wake up at 4 a.m.

And, “no associating with the other gender.”

Which meant the two of us slept in separate rooms - separate floors, actually. The rooms were large, plain and lined with a heated linoleum floor upon which we placed our provided quilted sleeping mat, pillow and comforter. Heated floors go back thousands of years in Korea. With their cold winters, they need it.

Gogul Temple here in Southeast Korea is a collection of pagodas with traditional, brightly painted clay tiles lining the eaves. The temple grounds climb along a very steep road, lined with these pagodas.

When we arrived, our English link to all this, Norwegian monk Sveinivar Ringheim, was chatting with the handful of other Western visitors next to the coffee machine. Machine coffee at 30 cents a pop is one of Korea’s wonderful little surprises. And while the monks don’t partake, there’s no rule against visitors swigging enough caffeine to get them going well before dawn.

“We are getting more and more Western visitors,” Ringheim said, while scratching the ears of Golgul’s Korean Jindo dogs. The pups, appropriately, wear Buddhist prayer beads instead of dog collars.

Dinner was rice, sweet potatoes and an assortment of vegetable dishes. Then it was down the hill a good quarter mile and some 700 vertical feet below to the Sunmudo school. We were beginning to feel like Uma Thurman in “Kill Bill 2.”

The training room looks like a huge gym, albeit with a shrine at one end. The floors are hardwood and around the walls are handrails, like you’d find at a ballet school.

We kneeled on cushions and the chanting began. It’s more like singing - a rhythmic, melodious roller coaster of harmonized sounds. With lots of bowing.

The meditation with crossed legs in lotus was a chance to empty our minds and let the extraneous worries of the day drain away, along with all sensation in our feet.

But then we started a series of stretches - toes, ankles, knees, arms, neck, waist and several backbend movements that are truly not meant for the human body. Call it the Schwarzenegger of stretch routines. At one point we were on our backs, bent double with our toes touching the floor behind our heads.

The Westerners wound up at one end of the room with Ringheim, who led us through Bowing 101 - how to hold our hands, how far to bend, how to kneel and even where to place our toes in the process.

And then we got to watch the experts.

If you think Korean Buddhist monks just sit around praying and chanting, you haven’t seen Sunmudo. Actually, in past centuries, the monks were the backbone of Korea’s warrior army. For centuries, Sunmudo was kept secret, taught only in temples, until Grand Master Seol Jeog-un began teaching it to the public in 1992.

Sunmudo done by a master looks like something from a Jackie Chan movie with weightless jumps, twists and kicks. It’s a combination of gymnastics, yoga, meditation and martial arts but with a focus on Buddhist beliefs and breathing, Ringheim explained.

By the time we hiked back to our sleeping quarters, it was time for bed. And six hours later, on the dot, the wake-up drum began.

Morning prayers and chants take place at the temple near the top of Golgul’s pretty grounds.

Most visitors want to taste temple life and Korean Buddhism at its source. But some come with personal problems and questions.

The Grand Master talked about this and also about the temple stay program. It began with the 2002 World Cup games. The government, realizing there weren’t nearly enough hotel rooms for athletes, much less fans, asked temples to take in guests. The program was so popular it never stopped.

Today, there are 43 participating temples that had some 24,000 visitors last year. Some temples specialize in rest, others in meditation, still others in martial-arts training.

After tea, we headed back down for more training. This time it got serious. We even attempted kicks and one-legged balancing.

Despite the warrior aspects of all this, instructor Sun Kyung-moon insisted, “Our aim is not fighting skill, it is to purify the body and mind and get enlightenment. You can get this not only sitting but also walking and even in martial arts.”

Mercifully, an hour later, we were spared further enlightenment through the scheduled 108 bows (one for each of the sufferings encountered throughout life’s stages).

We were sore, but appreciated this truly authentic experience.

And we wanted more. Twenty-four hours hardly gives you a whiff. Next time we vowed to try and stay a week.