Penang, Malaysia -- TRANQUIL is an apt word to describe the historical Dhammikarama Burmese Buddhist Temple in Burma Lane, Penang. Although, there are many visitors daily, both foreign and local, the place is quiet and serene. 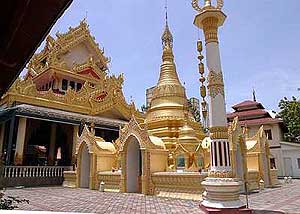 Built in 1803, the temple is one of the oldest heritage temples in the country. Consistent maintenance and renovation has kept the building in good shape.

At the main entrance archway, visitors get to feast their eyes on vivid drawings depicting important events in the life of Buddha.

Frequent visitor Taras Linda, 56, from Indonesia said the archway was beautiful and meaningful as it was like a pictorial story book.

It is an eye-opening experience for both lo-cals and foreign visitors to see the extensive handcarved decorations that surround the Sasana Vamsa Sima Shrine Hall.

According to temple management committee secretary Yeap Theam Kwee, these wood carvings were made by Burmese artists.

Standing in the centre of the hall is a huge statue of Buddha. The head and feet of which were made of carved marble stones.

“The Sima Hall is the most sacr-ed place in a Buddhist temple therefore we wanted to make it unique and nice,” he said.

Built in 1995 to replace the smaller old shrine following the increase in the number of devotees and visitors, the Sima Hall’s design idea came from the current chief monk of the temple, Upanya Vamsa.

“The old Sima hall is a historical building built in 1838 so instead of demolishing it we decided to move it aside, brick by brick,” he said.

Further inside the temple compound is a big three-dimension (3D) wall mural and a tableau that depicts the Great Renunciation of Prince Siddhattha.

The big pool in front of the mural is a ‘wis-hing pool’ with several revolving metal bowls labelled with wishes such as ‘health’, ‘wealth’ and others.

Coins collected from the pool are donated to the temple.

Another attraction at the temple is the Ara-hant Upagutta Shrine constructed in 1976.

Arahant Upagutta was believed to possess the supernatural power to overcome all ob-stacles, problems and fulfilling wishes of devotees.

Leza and Darren Sack from South Africa said the temple was impressive.

“We love the calm ambience and the sere-nity when we enter the temple. It is fabulous,” they said.

The temple has many other interesting features and beautiful statues for budding photographers to take pictures.