On the road to Shangri-La

Yunnan Province, China -- I STOOD upon a mountainside: a sacred waterfall rages down from high above while an impassable glacier blocks the way ahead. I had travelled across most of south-west China to find a hidden valley trail that led me over halfway up the 6740m giant called Kawakarpo. 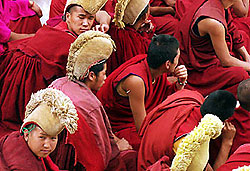 This valley path appears on no maps but for centuries has been walked by Buddhist pilgrims in search of a blessing by Mt Kawakarpo – a blessing that can only be earned by passing beneath its waterfall three times.

My own pilgrimage began six days earlier as I left the Naxi city of Lijiang and entered the Deqin-Tibetan Autonomous Region in China's Yunnan province.

Officially, I had stepped into what the communist government has dubbed Shangri-La, a mystical fairyland with snow-clad mountains, 1000-year-old glaciers, primitive forests and clear pure lakes, inhabited by peace-loving people.

The reality is far from the blurb in populated areas, but it's not out of reach beyond.

Bordered by Burma, Laos and Vietnam, Yunnan is in the middle of an investment boom driven by the strength of its UNESCO World Heritage area – The Three Parallel Rivers (Yangtze, Mekong and Salwee).

It is reputedly a 1.7 million-hectare sanctuary for a quarter of the world's known animal species. This diverse richness has forged the changing landscape of China's rural south from peasant heartland to emerging tourism hub.

Thankfully, the closer our group gets to the mountainous Tibetan border the less the region looks like a theme park and the more it reveals the landscapes, places and faces of Shangri-La which author James Hilton dreamed in his 1933 classic, Lost Horizon.

Stopping among endless fields of wild rhododendrons and scrub azaleas, we find two striking Tibetan girls in traditional dress who, for the right price, pose for happy snaps with the splashes of pink, violet and white flowers.

Our journey follows the Yangtze River north toward Gyalthang, the capital of Shangri-La and a spiritual home to Tibetan Buddhists.

Sumtsaling is the second most important monastery to the Tibetan Buddhists after Lhasa, and is quickly becoming equally important to their economy.

The stale smell of the burnt butter candles glowing in almost every room makes me queasy, but it is made worse by the production crew filming the Chinese soap, Road To Paradise, on the monastery's rooftop.

It's not my first taste of a changing China, just the most blatant. Their love of a quick buck is no more evident than the Gyalthang Old Town.

Two years ago it was simply a very old town with no plumbing and less reason to visit.

After a few days in gaudy Gyalthang we drive to nearby Rhinga Valley for a last taste of civilisation before embarking on four days of trekking through the Meili Snow Mountain Range in search of the sacred waterfall.

It's a welcome change to break bread with a local family and roast our feet by a wood-fired stove, which forms the focus of their chalet-style home.

The Namka family is of the Khampa warrior tribe, ancient guardians of the Dalai Lama, and they still wear their ornate daggers with pride.

Most of lunch was hanging from their ceiling only minutes earlier: smoked pork strips, spicy yak meat, sour cheese, and sampa bread for desert – the closest thing to chocolate cake this side of the Mekong.

Later, we take our convoy of four-wheel-drives on to the Yunnan-Tibet Highway, leading us to the threshold of Tibet proper.

The highway is one of the truly great drives of the world. It climbs and dives from one mountain to the next, passing through warm valleys of walnut trees, olive groves and apple orchids. At its highest, 4210m, the road turns to cobbled stone for traction in often icy conditions – treacherous for travellers but ideal for mushrooms.

There are about 25 local varieties found in these parts, but the rarest and most expensive, the musutaki, only grow above 4000m. And where you find the big, black and brown money-makers ($14 per kilo), you will find some of the last genuine nomad tribes in the world.

After a full day's driving, stopping to witness a torga ceremony, or at the 17th-century Dhondupling Monastery, we arrive in Deqin at dusk.

The frontier town was once the last-stop trading hub between China and Tibet.

From our cheap hotel on the fringe of Deqin we can see the Meili Snow Mountain Range, a little more than an hour's drive away. We continue on foot deep into its heart – the magical Yuben Valley.

Yuben village is hidden from the eyes of the world by five mountains, the grandest of which is Kawakarpo, a summit that, according to local lore, has never been conquered. The last person to try some 20 years ago never returned.

The only way in or out is to walk or convince a mule to bear the load. In this sheltered pocket we are only hours from the Tibetan border, which requires a separate visa to cross.

Our wooden guesthouse is basic, but the view from a 20-yuan bunk beggars belief.

If Shangri-La, that mystical land of snow-clad mountains, thousand year-old glaciers, primitive forests and clear pure lakes ever existed before Hilton put pen to paper, this was certainly it.

The trail continues for almost four hours until it joins a rapid, knee-deep torrent which leads upstream to the base of the sacred waterfall.

It is said Shangri-La cannot be reached until untold hardships are overcome, so I hold my breath and brace for impact.

Three times I run beneath the deluge, the deafening avalanche of water eclipsing everything beyond.

After my final pass I slip and cut a hand on jagged rocks. But there was no pain, just endless numbing cold and a quiet sense of satisfaction that my search for Shangri-La was over.