Jahangira, Bihar (India) -- Venerable Piyapala, Viraj and I left Bodh  Gaya at  three in the morning and spent the next  ten hours bumping over the pot-holed back roads of Bihar to get there. 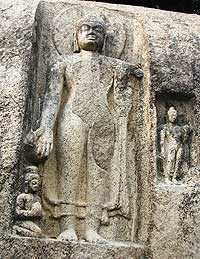 Other than those who live there and pilgrims from the surrounding area, few people go to Sultanganj, a small market town on the southern bank of the Ganges.  While the town itself has nothing to recommend it and is miles from nowhere, it is the stop-off place for one of northern India’s most remarkable temples.

Pilgrims come to the Ajgaibinath Temple at Jahangira and carry water from there all the way to Deoghar. One sees them in the streets, dressed in orange and carrying a pole on their shoulder with a brass water pots hanging from each end.

My interest in  Jahangira dates from the time when I began wondering where Vethadipa might be. Vethadipa is mentioned in the Mahaparinibbana Sutta as one of the eight places where the ashes of the Buddha were enshrined after his paranibbana.

The name occurs nowhere else in the Tipitaka or in any other Buddhist literature to the best of my knowledge.  Although it was obviously an island, (dipa means island)  the land where the Buddha lived and taught is 900 miles from the sea, so the only other possibility is that Vethadipa was an island in a lake or a river, probably the Ganges.

Although every monsoon flood creates sandy islands in the Ganges, there is only one permanent island along the whole length of the river, Jahangira.

We drove through Sultanganj’s narrow dusty streets, parked the car and made out way to the bathing ghats. As we came out of the lane and into the sunshine there it was – a cluster of huge boulders in the middle of the river with small temples and shrines perched on and around them, their whitewashed spires pointing up into the clear blue shy.

It is quite a sight!  We took a small boat over and had a look around.  The temples themselves are ugly modern constructions, grimy and pokey. But the boulders that make up the island are covered with some of the finest sculptures to be seen anywhere in India outside a museum.

There are lingams with Siva’s face on them, various Hindu gods and heroes, several statues of Ganesh and numerous images of Siva and Paravatti embracing and with the most ethereal smiles on their faces.

The Buddhist sculptures are on the boulders on the southern side.  The largest of these,  a standing Buddha about 1.5 meters high and almost identical to the statues from Sarnath,  has its right hand in the gesture bestowing blessings and a halo behind its head.

To its left of the image is a small kneeling figure, probably the person who paid to have the image carved, and on its right is a niche with a smaller Buddha image in it. Nearby is a much-worn image of Tara holding a lotus.

This and the Buddha image date from the 5th century and most of the other sculptures date from this same period and up to the 10th century. A little south of Jahangira is a rocky promontory called Murli Paha jutting out into the river. Here too the boulders are covered with fine sculpture, although the whole area is used by the locals as a toilet and stinks to high heaven.

Despite its historical and artistic importance, the only archeological description of Jahangira was written by Rajendralal Mitra in 1864. The place has been passed by, forgotten. But is it Vethadipa? The Buddhist sculptures there and those found in Sultanganj itself show that  it was an important Buddhist centre from an early period, probably before it began being shared with and later dominated by the Hindus.

Beyond that it is impossible to say. But one thing is certain. Jahangira is a an unusual and interesting place well worth a visit by those interested in seeing Bihar’s Buddhist heritage.