High on Mount Koya Julie Eagleton is nourished by the graceful rituals – and deliciously delicate food – of the monks of the Daishi religion.

Mount Koya, Japan -- My first prayer session took place on a Sunday morning. The temple was gently lit by flickering candles and as my eyes became accustomed to the dim light I saw an abundance of black and gold boxes, along with offerings of pink perfectly rounded grapefruit, flowers and red candles arranged on a shimmering altar. 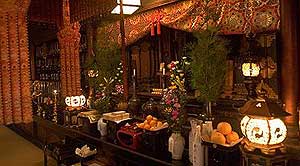 A crimson carpet streaked its way across a bed of beige tatami matting, signalling the way for prayer-goers.

Four monks with shaven heads, clad in tangerine robes, knelt before us in silent contemplation. The reverberation of one single drum beat heralded the start of the session, which progressed with symphonic chanting accompanied, intermittently, by a clash of cymbals.

The chanting held us all in a suspended hypnotic state until each person in turn was asked to navigate the crimson carpet on his or her knees.

Upon reaching the altar, we were encouraged to drop sweet-smelling incense into a burner while offering a private prayer.

I had come to Shojoshin-in Temple, at the heart of the Daishi religion high up on Mount Koya, to live alongside monks secluded from the outside world.

Set in eerie black clusters of cedars at an altitude of 3,000 feet at the centre of the Kii Peninsula, Mount Koya is Japan’s most venerated Shingon-Buddhist site, attracting more than a million pilgrims a year.

Daishi sailed from Japan in 804 for China to study Tantric Buddhism, and was granted a master title. Upon returning to Japan two years later, he began to spread the Shingon (true word) Sect of Buddhism, and the Emperor of Japan granted him the land to build the monastery.

By the Edo period, there were almost a thousand temples on the mountain, but now only 123 remain.

The best way to reach Mount Koya is to take the cable car from Gokurakubasi station, which can be joined via the Nankai line from Osaka.

It’s a 15-minute silent ride through densely forested hillside, with cedars like sentries flanking the path to a secret world.

The mountain’s charged atmosphere is best experienced with an overnight stay. Mount Koya has 53 temple lodgings where you can stay and observe the monks as they go about their daily rituals.

At the Shojoshin-in Temple, the monks are renowned for their preparation of shojin-ryori: a vegetarian gourmet food that is skilfully cooked without use of any meat, fish, onions or garlic.

Food is served by the monks in simple private dining rooms. Guests kneel on the floor and eat off low tables. The actual method of preparation is a well preserved secret. Having eaten shojin-ryori for breakfast and dinner, I can confirm that the cuisine was one of the highlights of my stay.

In typical Japanese style, rooms within the temple are simple, with screened doors, tatami mats and a small altar decorated with a flower or scroll.

A thin, yet comfortable mattress is folded away every morning and rolled out again on the floor in the evening. Early nights are a must as a prayer bell is rung at 6am sharp and guests are invited to visit the main hall of prayer at 6.30.

No visit to Mount Koya is complete without a trip to Daishi’s mausoleum, the Okunoin (inner sanctum), which is situated in the eastern half of Koya in a necropolis of more than 200,000 tombs and is the most sacred spot on the mountain.

There is a grand status attached to burial in Mount Koya and the stone path leading to Okunoin is lined with monuments and tombs housing the remains of Japan’s most illustrious families.

Elderly pilgrims, mostly dressed in white, climb the lantern-lined path leading to the Okunoin. Some tombs are decorated with red and purple bibs and hats. Occasionally jars of money are left along with little boxes of baby milk for Jizo, guardian of sick and miscarried children.

Directly in front of Daishi’s mausoleum is the Toro-do (Lantern Hall). Eleven thousand lanterns burn here day and night, including two that are said to have remained lit since the 11th century.

This is where most of the pilgrims lingered, including an elderly Japanese couple dressed in white capes, who, supported by walking sticks, stared ahead lost in thought.

Their journey was complete. To me they were a remarkable sight, but here on Mount Koya they were just two more pilgrims among the many millions.

Japan is a beguiling, mysterious and yet contradictory world of modernity and tradition, whose ways are difficult for Westerners to comprehend, but the ancient rituals maintained in the temples of Mount Koya bring us a little closer to understanding.

Japanese Guesthouses (www.japaneseguesthouses.com) offers rooms in the Shojoshin-in Temple from £80 a night half board.