Reputedly the home of the Boddhisattava of Wisdom, Wutaishan is one of the holiest Buddhist sanctuaries in China

Wutai Shan, China -- AFTER just a few days in Shanxi, it soon becomes obvious that Buddhism plays an inordinately important role in the province’s history. The trend no doubt began with the invasion of the staunchly Buddhist Tobas who created the Yungang Grottoes and established the short-lived Northern Wei dynasty 1,600 years ago. 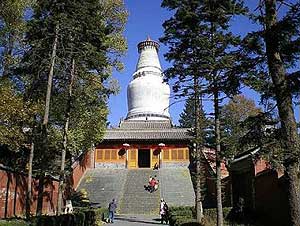 << The 700-year old white stupa of Tayuansi dates back to the Yuan Dynasty.

But this inclination seems to have continued through the centuries and from the moment my friends and I arrived in the province, we visited more grottoes, monasteries, temples and pagodas than I could have imagined.

Situated to the southeast of Datong, Wutaishan (Five Terrace Mountain) is one of China’s four most sacred Buddhist mountains, the others being Emei, Jiuhua and Putuo. Though Wutai is no more than a couple of hundred kilometres from Datong, the peak is some 50km from the nearest highway and depending on the route, it can take several hours to get there.

It was late afternoon when we reached Wutaishan. As our coach wound its way up to the monasteries, we enjoyed fleeting views of the mountain’s smooth, even summits (hence its name) bronzed by the rays of the setting sun.

Then without warning, night fell and all was cloaked in darkness. We lapsed into a nervous silence as our coach trundled along the unlit road for what seemed like a long time till suddenly, a bright, garish blinking neon sign appeared in the distance; we had finally reached the hotel where we would spend the night.

Wutaishan is reputedly the home of Wenshu (Manjusri) the Bodhisattava of Wisdom. Literature on the sanctuary says that since the Tang dynasty, manifestations and visions of Wenshu have been reported by pilgrims and monks, confirming the site’s holy status.

Apparently a verse in the Flower Adornment Sutra (Huayanjing) says Wenshu’s earthly home is on a clear, cold mountain and since Wutaishan is also known by its very Daoist-sounding ancient name Qingliangshan (Clear, Cold Mountain), it came to be accepted as the much-revered Bodhisattava’s abode.

The peak certainly lives up to its appellation because although it was only October, the forecast was for -11°C that night, with a day high of 8°C. I later found out from our guide Mina that winters are routinely -40°C and even summer temperatures are in the teens.

As for clear, the sky was a cloudless cobalt blue the next morning and on our way to the monasteries, we passed people braving the chill to enjoy the fine weather on horseback.

There were once 360 temples on Wutai, although currently only about 50 have been restored. Most were constructed by imperial edict during the Tang, Ming and Qing dynasties, but the earliest one, Xiantongsi, dates to the eastern Han period 2,000 years ago when Buddhism first entered China.

Xiantongsi’s spacious tree-shaded Han-style courtyards and cool, quiet elegance provides a welcome relief from the closely-packed, richly furnished monastic worship halls of the other edifices, mostly in an eclectic mix of Han, Tibetan and Mongolian styles. Bustling with tourists and worshippers, these seemed to merge one with the other and after a while, I began to lose track of their names.

Although Shanxi is nowhere near Tibet, the Himalayan influence appears surprisingly strong on Wutaishan as lamas were invited to settle there by various Chinese emperors. Most notably, when Tibet was again fully incorporated into China in the Qing dynasty, Lamaism became increasingly dominant.

Under some trees in the corner of a temple courtyard, two red-robed Tibetan monks repeatedly made full-body prostrations in worship, while next door, lamas intoned the scriptures in an opulent hall decorated with heavily embroidered buntings. Outside, a novice in monk’s robes, perhaps seven or eight years old, sat sunning himself near a flower bed.

Old traditions are still maintained on Wutai which is applying for Unesco World Heritage status. As I stepped into the Wanfoge Temple, I found a group of actors in full opera makeup standing to the side of the courtyard. They were waiting to perform for patrons wishing to dedicate an aria as thanksgiving, and there was even a small storeroom near the main gate reserved for their costumes and props.

Meanwhile, over in the cooking halls of Pusading Temple, huge copper cauldrons 2m wide and set into stovetops stand ready for use during the annual celebrations of Wenshu’s birthday and Sakya muni’s Enlightenment when hundreds of monks and pilgrims descend on the mountain.

At one of the sanctuaries in Wutaishan, a mural depicts three monks in a boat sailing into the distance. Seen from various angles, the boat seems to head in different directions on the river.

“What message did the monk who painted the mural want to convey?” asked our guide Mina. Several of us attempted a guess but Mina just smiled when we asked for the answer. Even now, at quiet moments I sometimes still ponder this Chan (Zen)-like question from the Clear, Cold Mountain.