Much loved city of the Buddha: Vaishali

Vaishali, India -- Vaishali today is a small village surrounded by banana and mango groves as well as rice fields. But excavations in the area have brought to light an impressive historical past. The epic Ramayana tells the story of the heroic King Vishal who ruled here. 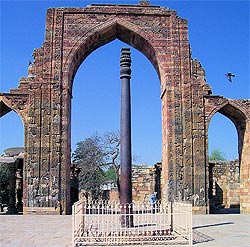 Historians maintain that one of the world's first democratic republics with an elected assembly of representatives flourished here in the 6th century B.C. in the time of the Vajjis and the Lichchavis. And while Pataliputra, capital of the Mauryas and the Guptas, held political sway over the Gangetic plain, Vaishali was the center for trade and industry.

Lord Buddha visited Vaishali frequently and at Kolhua, close by, preached his last sermon. To commemorate the event, Emperor Ashoka, in the third century B.C. erected one of his famous lion pillars here. A hundred years after the Mahaparinirvana of the Buddha - Vaishali hosted the second great Buddhist council.

Two stupas were erected to commemorate this event. Jainism, too, has its origins in Vaishali, for in 527 BC, Lord Mahavir was born on the outskirts of the city, and lived in Vaishali till he was 22. Vaishali is then twice blessed and remains an important pilgrim center for both Buddhists and Jains, attracting also historians foraging for the past.

On the outskirts of Vaishali stood the grand double storied Buddhist monastery. Buddha often discoursed here. He extended spiritual enfranchisement to women by admitting them to the Holy Order which was founded here. Legend has it that on one of his visits, several monkeys dug up a tank for his comfortable stay and offered him a bowl of honey. This is regarded as one of the great incidents in the legends of Buddha, who announced his approaching Nirvana and preached his last sermon here.

The Lichchhavis came a long way to bid him farewell on his way to Kushinagara and finally, they were stopped by a river created by Buddha.Â He once again paused to have a last look at his much loved city. He had already given his alms bowl to Vaishali which remained there for long time.

A life size-pillar beside a brick stupa at Kolhua commemorates Buddha's last sermon and announcement of his approaching Nirvana. The lion faces north, the direction Buddha took on his last voyage. Adjacent to this is the tank associated with the monkeys offering honey. Nearby are the skeletal remains of a monastery where Buddha resided and stupas dot the region.

Vaishali museum houses some of the archaeological remains discovered here. Facing the museum is the Abhishek Pushkarni which was holy to Lichchhavis. On one side of the lake is newly built Vishwa Shanti Stupa, a sixth in the series to be erected in India. Close to the museum is the shaded stupa which is supposed to have housed the casket relic with the ashes of Buddha.

Archaeologists have uncovered a good deal of Vaishali. It begins with a huge mound which is associated with the ancient Parliament referred to Raja Vaihala Ka Garh. Bawan Pokhar temple houses a rich collection of black basalt images dating back to the Gupta and Pala period.

Another black basalt, four headed Shivling (Choumukhi Mahadeva) was discovered when a reservoir was being dug. Behind the Bawan Pokhar temple is a Jain temple famous for its image of the Trithankar. A little distance from these temples lies the Lotus Tank which used to be a picnic spot of the Lichchhavis.

Further north at Lauria Areraj, 31 kms from Motihari, lies one of the Ashokan columns with six of his edicts. The column is devoid of its capital. Another Ashokan column along with the lion capital can be visited at Nandangarh, 23 kms from Bettiah. These pillars possibly mark the course of the ancient Royal highway from Patliputra to Nepal valley.

Few kilometers from the monolith at Nandangarh is the mighty brick stupa which is believed to have stored the casket relic containing the ashes of Buddha. At Nandangarh one can also see a dozen Vedic mounds that contain the remains of ruling clans of pre-Buddhists times.

What to See
Ashokan Pillar: Emperor Ashoka built The Lion Pillar at Kolhua. It is made of a highly polished single piece of red sandstone, surmounted by a bell shaped capital, 18.3 m high. A life-size figure of a lion is placed on top of the pillar. There is a small tank here known as Ramkund. This pillar beside a brick stupa at Kolhua commemorates Buddha's last sermon.

Buddha Stupa-I: The exterior of this stupa which is now in a dilapidated condition has a plain surface. One eighth of the sacred ashes of the lord Buddha were enshrined here in a stone casket.

Buddha Stupa-II: Excavation at this site in 1958 led to the discovery of another casket containing the ashes of the Lord Buddha.

Abhishek Pushkarn (Coronation tank): It contains water that was believed to be sacred in the old days. All of Vaishali's elected representative were anointed here before their swearing in. The Lichchavi stupa was located near here. The stone casket of the sacred ashes of Lord Buddha was enshrined here in Vaishali.

Kundalpur: Birth place of Lord Mahavira. Four km. It is believed that the Jain Tirthankar, Lord Mahavir was born over 2550 years ago. Mahavir is said to have spent the first 22 years of his life here.

Raja Vishal ka Garh: A huge mound with a circumference about one kilometer and walls nearly 2 meter high with a 43meter wide moat around them, is said to be the ancient parliament house. Over seven thousand representatives of the federal assembly gathered here to legislate and discuss the problems of the day.

Shanti Stupa: On the south bank of the coronation tank, built by Buddha Vihar Society.

Other Attractions
Vaishali Mahotsava: Vaishali Mahotsava is held to celebrate the birth anniversary of the Jain Tirthankar, Lord Mahavir on the full moon day of the month of "Vaisakh" (mid-April).

How to reach
Air: The nearest airport is Patna (70 kms).